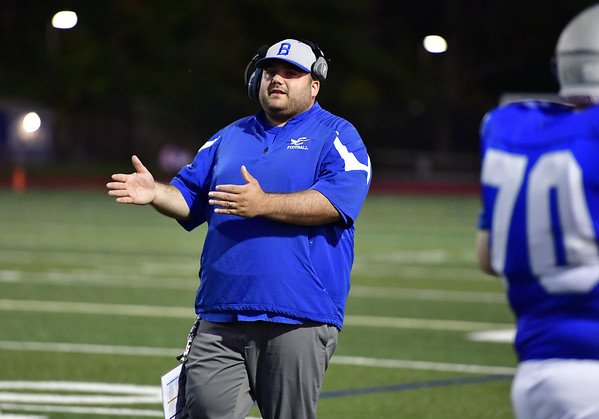 The Bristol Eastern Lancers entered Friday night‚Äôs game hoping to record their first win of the season and while the halftime score looked promising for the Lancers, struggles with their offense will force Bristol Eastern to wait another week to accomplish their goal.

The Lancers have now fallen to 0-4 after being defeated by Avon 24-8. Bristol Eastern coach Anthony Julius said the team never seemed to be able to get in sync offensively/

‚ÄúI know we gave up 24 points, but I thought our defense played really well most of the night,‚Äù Julius said. ‚ÄúThat‚Äôs an offense that is designed to stay on the field and churn the clock. They were able to do that in the second half because we weren‚Äôt able to stay on the field on offense.‚Äù

The Lancers entered the game knowing that in order to be successful, their defense would have to play well. The defense took that message and played with a chip on their shoulder in the first quarter as they held Avon without a first down on their first two drives.

While Bristol Eastern‚Äôs offense wasn‚Äôt able to get much going at first, the special team‚Äôs unit allowed the Lancers to play the field position game. After the Lancers second drive stalled, the punting unit put the ball all the way down at the 2-yard line.

On the very next play, the Lancers registered a safety and putting Bristol Eastern on the board first

Then on the ensuing kickoff, the special teams gave the Lancers good field possession again allowing the offense to set up shop on the 37-yard line. Behind Jaiden Fore, the Lancers scored their first touchdown after he ran for an 8-yard score.

In the second quarter, Avon‚Äôs run-heavy offense got it going as Connor Lavore and Nik Meltser drove down the field. Metser finished off the drive with a 10-yard score around the right edge. However, a failed 2-point conversion would leave the score at 8-6 going into the half.

‚ÄúThe special teams were really good today,‚Äù Julius said. ‚ÄúIn the kicking game we did a really nice job. We kicked off well, we punted well, we covered well and defensively we did a lot of good things. We had a few breakdowns, a few lapses here and there, but that‚Äôs the game‚Ä¶they were just on the field for a long time.‚Äù

Despite the stellar play of the Eastern‚Äôs defense and special teams, the Lancers lost their grip on control as the second half began. Without Fore, who left the game with an injury in the second quarter, the Lancer‚Äôs offense was dead in the water, fumbling twice.

Avon recovered the first fumble on their own 44-yard line and capitalized with a Lavore 1-yard touchdown. The second fumble allowed Avon to recover the ball on Eastern‚Äôs 11-yard line. Lavore once again capped off the drive scoring a 7-yard touchdown run, but at that point Avon was already up 18-8 thanks to a 4-yard touchdown run from Meltser earlier in the fourth quarter.

Julius said the loss of Fore in the backfield was certainly felt, but it was the offense as a whole that just couldn‚Äôt get going.

‚ÄúUnfortunately, it‚Äôs been a lot of next man up for us this year, but that‚Äôs not an excuse,‚Äù Julius said. ‚ÄúThe kids that are going out there are doing a great job and the best that they can do. We‚Äôre just going to keep trying to get them prepared.‚Äù