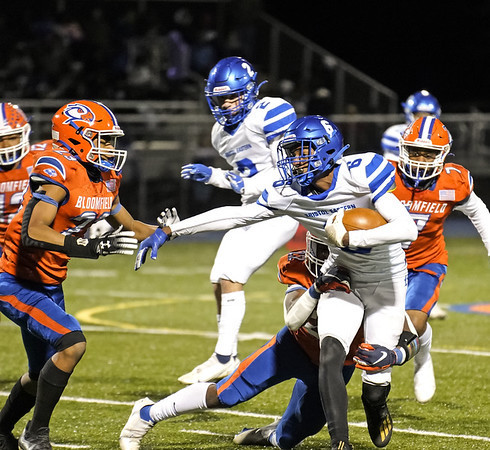 BRISTOL – The goal for Bristol Eastern coming into the season was to finish when a win was in reach, and for a moment during Friday night’s home opener it looked like the Lancers were ready to do just that. But after taking a 20-point lead heading into the half, the Lancers fell apart in the second as penalties allowed RHAM to climb its way back.

RHAM beat the Lancers 23-20 as Raptors’ Max Nylen and Michael Marquee capitalized on several of the Lancers untimely penalties.

“The kids didn’t quit and you have to give them credit for that, but again it’s little things that lead up to that point that put us in that situation where we have to come from behind,” Bristol Eastern coach Anthony Julius said. “As a coaching staff, we’ll try to get this cleaned up and put a better disciplined product on the field next week.”

Offensively, the Lancers’ game plan simply revolved around getting Rayshon Andrews the ball. Andrews scored all three of Eastern’s touchdowns in the first half.

To start the first quarter, the Lancers took the field after a quick defensive stop and looked to feed Andrews early and often. On first down with 8:05 on the clock, Andrews turned the corner and streaked up the sideline for a 35-yard touchdown run.

On the ensuing kickoff, Bristol Eastern recovered a loose ball that deflected off one of the RHAM’s players. Then on a crucial 4th and 11 from the Raptors 36-yard line, the Lancers took a shot at the end zone where quarterback Kamden Laprise found Andrews for his second touchdown of the day.

Andrews scored once more to give the Lancers a comfortable 20-0 lead after a 52-yard run heading into the break.

“Rayshon is a great player. He has superstar written all over him,” Julius said. “He’s somebody that we are going to rely on offensively this year.”

Julius said it was nice to see some of the other players get going as well, but the team just “sputtered” in the second half.

In total, the Lancers were penalized 13 times for 115 yards. The penalties also directly led to a 50-yard touchdown catch and 42-yard scoring catch, both by Andrews, being called back. It also led to safety which aided RHAM’s comeback.

“Very undisciplined,” Julius said. “It was disappointing to say the least, but at the end of the day you can’t make excuses about that. We have to make more plays than they do, and you have to give RHAM credit. They made more plays in the second half and we didn’t make enough.”

Halfway through the third quarter, the Raptors made their mark on the game with Max Nylen taking a handoff 80 yards to the end zone for a score. The play sparked some life into RHAM as its defense forced the Lancers into four consecutive punts.

The safety and a 69-yard touchdown return by Nylen on the ensuing kickoff put RHAM within reach of an impressive comeback.

With a little above one minute left on the clock, a nine-yard run from Marquee gave the Raptors the win and handed the Lancers their first lost in a fashion Bristol Eastern is all too used to.