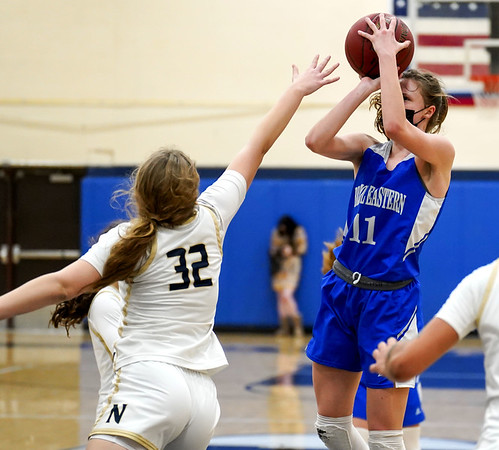 Bristol Eastern girls basketball lost a tough 46-45 decision to Bethel in the opening round of the Class L State Tournament. Eastern, ranked 21st, finished their season with an 8-13 record while Bethel, ranked 12th, is now 13-8.

Eastern trailed 9-2 after the first period, but then outscored the Wildcats 11-2 over the first 2:47 of the second period, taking a 13-12 lead on a steal and drive to the hoop by Emma Stavens. Janessa Gonzalez scored eight points in the second quarter as Eastern led 22-19 at the half.

Gonzalez and Ciara Collins opened the third quarter with hoops, Gonzalez then hit a baseline jumper midway through the period, followed by two foul shots as the Lancers opened up a 30-22 lead. But then Bethel went on a 10-0 run over the next three minutes, and took a 32-30 lead, going to the hoop for four hoops in the process. Bethel led 34-32 at the end of three.

Teams went back and forth in the fourth period as Stavens hit a three from the baseline with 1:50 to play, and Eastern went up 41-40. Bethel's Brooke Lacey (18 points) then canned a three with 1:35 to play as the Wildcats took a 43-41 lead. Collins tied the game with two foul shots with 1:08 to play. Lacey then scored on a drive, plus a foul shot on the play, and Bethel went up 46-43 with just under a minute to play.

Collins was fouled and made two foul shots, Eastern closing to 46-45 with 40 seconds left. Eastern had a chance, in the closing seconds, putting the ball in bounds at half court with nine seconds to play before Collins drove to the hoop into a double-team and missed the shot with 3.3 seconds to go. Easter maintained possession after the ball out went of bounds, but Bethel stole the inbounds pass to come away with the win.

Gonzalez and Collins were the high scorers for the Lancers with 18 and 14 points, respectively, while Stavens scored eight.

Berlin 39, Weston 35: The ninth-seeded Redcoats are moving on to host 25th-seeded Branford in the second round of the Class MM State Tournament after beating Weston on Monday.

Berlin dominated the backboards as Alivia Halkias, Kailee DeMaio and Maddy Sadowski each grabbed eight rebounds as the Redcoats led from early in the contest. They carried an eight-point advantage into halftime before Weston’s defense tightened up and limited Berlin to 12 points in the second half, and three in the fourth quarter.

Clare McGeever led all scorers with 11 points, hitting three of her team’s five threes. Rylee Cop drilled the other two triples as she and DeMaio each added eight points.