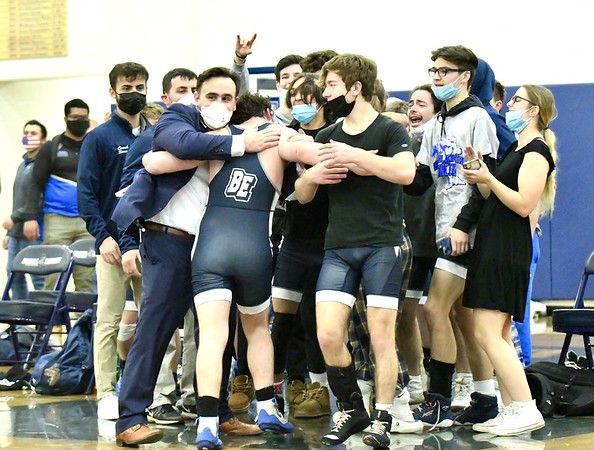 A third-period pin for senior Kaiden Dionne (170 pounds) over sophomore Jayden Colon secured a 45-34 win for the Lancers in a match that featured nine pins. Up next for both teams will be the Class L state tournament at Wilton High School on Feb. 18 and 19.¬Ý

Eastern led by five points entering the final match, meaning a pin for Central gives them a one-point win. Looking to stay off his back at all costs, Dionne pulled a pin 43 seconds into the third period to break a tie score after two periods.¬Ý

‚ÄúKaiden had a great match,‚Äù Eastern coach Eric Soucy said. ‚ÄúWhen you come down to the last match of the night and both teams have an opportunity to win, you know it‚Äôs big. We have a lot of faith in Kaiden, he‚Äôs one of our senior wrestlers, he‚Äôs wrestled since he was a little kid. So when we found out the weight classes we were ending with tonight, we felt very confident about how he was going to perform and that he was at least not going to get pinned.‚Äù

Dionne‚Äôs pin was the last of five consecutive falls to close the meet with the lead bouncing back and forth between the two teams. The first of those pins gave Central its first team lead of the day when freshman Lincoln Archibald (138) dispatched senior Thomas Vontell in 49 seconds.¬Ý

The Lancers took the lead back in the next match when junior Josh Aubin took (145) took a 7-0 lead into the third period against Araya Guilmette and finished her off 26 seconds later. Senior Umar Malick (152) put the Rams back in front by one point after he narrowly avoided going to a second period against senior Ella Nichols by pinning her with seven seconds left in the opening period.¬Ý

‚ÄúMe and her, stylistically, we kind of know each other well and today I just got the best of her,‚Äù Malick said.¬Ý

Senior Alex Marshall (160) made quick work of sophomore Dom Sedlak and put Eastern in a position to win the meet with a 38-second pin. This gave the Lancers a five-point lead entering the final match of the night.

Easter led 27-12 halfway through the meet following a forfeit at 106 pounds, a 79-second pin from senior Anthony Silva against Joey Niek and a 10-7 decision for junior Mike Roalf over freshman Julian Colon. Colon led 5-3 after two periods, but Roalf charged back to score seven points in the final period and earn an important win for his team.

‚Äú[Colon] was very strong going into it,‚Äù Roalf said. ‚ÄúAt the end of the match it was just about who wanted it more and we both came here to wrestle and I came out on top.‚Äù

Central came back to take the lead with Archibald‚Äôs pin, which was preceded by a forfeit at 126 pounds for senior Will Hamilton and an 11-3 major decision for Aiden Lamarre (132) of senior Nate Torres. Lamarre fell behind early but came back strong after allowing some points to Torres early in the first period.

The meet was tied 12-12 after the first four matches as Eastern won the opening two with a forfeit at 182 pounds and a first-period pin for sophomore Jaiden Fore (195) over sophomore Eric Cooper. The Rams answered with consecutive pins in the heaviest weight classes as senior Gabe Buden pinned sophomore Owen Broyles in 90 seconds and senior Jeff Labbe (285) dispatched junior Evan Gleifert just after the one-minute mark of their match.