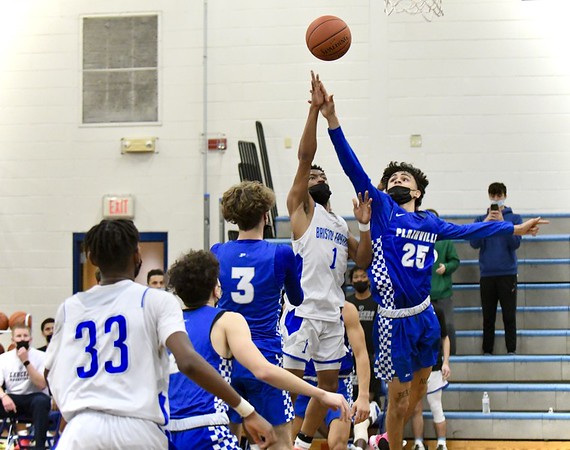 Nasir Walker-Jenkins (1) of Bristol Eastern floats a shot up and over a Plainville defender Monday night. | Laura Bailey Buy this photo
Published on Tuesday, 18 January 2022 19:38
Written by MATT HORNICK

BRISTOL ‚Äï Driving with the ball in his right hand and less than a minute left in overtime, Bristol Eastern senior Nasir Walker-Jenkins hoisted a floater over a Plainville defender and the ball rolled its way around the rim before falling.

The shot gave the Lancers a 55-53 lead over the Blue Devils, who jumped out to a six-point lead shortly into overtime. In a game where both sides had an answer for everything their opponents did, Eastern charged back to retake the lead and hang on for its third win of the season.

Walker-Jenkins scored 11 of his 19 points in the fourth quarter and overtime as he led a young team to victory in a stressful situation. The senior guard bounced back from a pair of early fouls to carry the Lancers with a strong second half.

‚ÄúI have to give him credit because earlier in his career those two fouls would‚Äôve put him out mentally,‚Äù Eastern head coach Bunty Ray said. ‚ÄúHe really took a breath, went in, and did his job as the only veteran out there. He wanted those shots down the stretch, he took them and he converted.‚Äù

Along with his success shooting down the stretch, Walker-Jenkins took charge of the offense and made plays for his teammates as well as himself. After making a layup to come within one point of Plainville in overtime, Walker-Jenkins stole the ball and set up Nate Fries for an open score under the basket to take the lead.

‚ÄúThere are some young kids out there and [he] created shots for them and made the shots that [he] needed to,‚Äù Ray said. ‚ÄúI can‚Äôt say enough about what he did down the stretch, he‚Äôs our leader. He was our leader and he wasn‚Äôt on an island today. He was a leader and he was leading and bringing kids with him, and they were bringing him with them, too.‚Äù

Walker-Jenkins led the way for Eastern late in the game, but the team pulled out this win because everyone on the team kept their composure as the situation became more intense. While still not fully healthy, the team is more complete now than at any other point so far this season and is growing together after a difficult start.

Securing a win with both teams going back and forth is a good lesson to learn from for the Lancers for when they could possibly find themselves in similar situations. They played four sophomores on the floor for much of the game and were without senior Elijah Borgelin, which gave less experienced players a chance to step up for the first time.

‚ÄúYou want your team to play in these types of games because it only pays dividends,‚Äù Ray said. ‚ÄúWhen you‚Äôre in a timeout, you need to be able to execute and the only way to do that is to make sure that you‚Äôre doing it under stressful situations.‚Äù

Eastern and Plainville met to start the season Dec. 16 and the Blue Devils defended their home gym with a 19-point win. Both team‚Äôs lineups looked different in the second meeting, but the Lancers‚Äô improvement on both sides of the ball was noticeable.

‚ÄúIt was the first game of the year so you don‚Äôt know their personnel all that much,‚Äù Ray said. ‚Äú[In this game] we kept them in front and made them make tough shots and they still made tough shots, but they didn‚Äôt make as many easy baskets as they did against us the first time. They had to work a little bit harder and over the course of the game, that wears on you.‚Äù

Eastern has another challenge ahead of it as it travels to Conard (7-1) on Thursday, but Ray wants his players to enjoy their hard-fought victory.

‚ÄúNormally, I [want] to get to work on the next game, but I really want them to celebrate,‚Äù Ray said. ‚ÄúIt was nice to go into the locker room with a team that‚Äôs really young where victories are very hard to come by.‚Äù