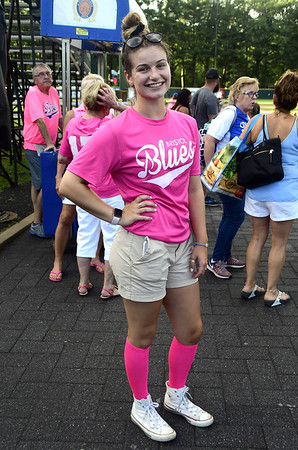 Brianna Root at Muzzy Field while working for the Bristol Blues in 2018. | Mike Orazzi | File Buy this photo
Published on Thursday, 2 December 2021 20:42
Written by MATT HORNICK

More than three years removed from her time playing volleyball in college, Brianna Root was struggling with her relationship to the sport she gave her life to as its presence dwindled from her day-to-day life.

Now living in Oklahoma and working for the Tulsa Drillers Minor League Baseball team, Root was feeling more detached than ever from the sport she dedicated much of her younger years to. That changed when she received a call from her former coach at Post University, Michael Brienza, notifying her she was nominated as an inductee into the Connecticut Women’s Volleyball Hall of Fame.

“I was super grateful when I found out,” Root said. “It was definitely a shock to me when I got the call. My coach had actually given me the call to let me know I was going to be nominated and accept the nomination. I was super grateful and I was absolutely shocked that I had made that much of an impact into that volleyball world.”

Root finished her time at Post University as the school’s all-time leader in assists (4,753) and a three-time all-Central Atlantic Collegiate Conference first team selection before spending some brief time playing professionally in England while enrolled in graduate school at the University of Essex.

Her run of playing volleyball at a high level did not end on her terms, as the covid-19 pandemic brought her back to the United States sooner than she anticipated. Navigating an uncertain situation she was not expecting to be in, she had less time for volleyball than ever as she worked and looked for her next opportunity in her desired field of sport management.

“When I got this nomination, I was actually pretty mad at volleyball,” Root said. “I was mad that I wasn’t playing anymore, I felt like I wasn’t being impactful anymore. Volleyball has been my identity for so long, that to lose that part of me for a little while, I was a little lost. When I had gotten this nomination and it was [decided] that I am going to be a hall of famer for the Connecticut Women’s Volleyball Hall of Fame was amazing. I was super appreciative of it, but it helped to solidify all of the thoughts and feelings I had growing up.”

Before her record-setting collegiate career, Root won a state championship at Bristol Eastern in 2012 and earned all-state honors twice.

She, along with the rest of the hall of fame’s 2021 class, were recognized at the Aqua Turf Club in Plantsville where Root had a whole crowd in attendance to support her including her parents, grandparents, boyfriend and coaches from Post.

“It was great to be acknowledged, but it was about the people who had joined me that night,” Root said. “I had over 45 people in that room that came for me and every single person in that room that attended impacted me in such a great way. It really goes out to them, if I didn’t have them around me I wouldn’t be the person, the volleyball player that I am today.”

While her time playing volleyball professionally is on pause, the sport will always hold a special place for Root and remain a part of her life going forward. Earning an honor such as this hall of fame induction only validates her commitment so an activity she loves.

“Everything that I have put, my heart and soul, into this sport was truly being recognized and that was something that was great to see,” Root said.