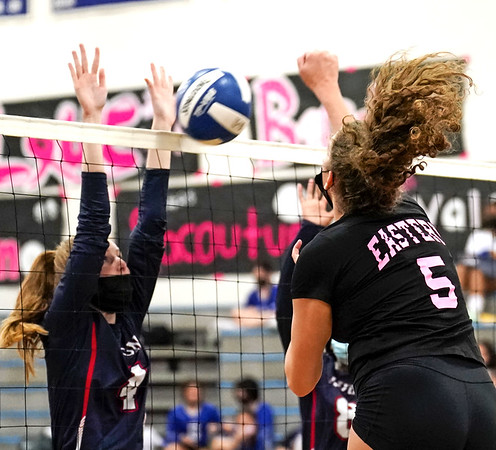 The Lancers dominated the first set and then battled in the next two to quickly add a win to their record. Senior Hannah Webber notched 21 kills from the Eastern side of the net to lead the offensive attack, followed by 12 kills from junior Lauren Bender.

Coming off a 3-0 loss to RHAM last week, the Eastern wanted a more consistent and cohesive effort in this game, which it found with varied success throughout the contest.

“I was able to trust all the girls on the court,” Webber said. “Lauren [Bender] was stepping up, we were all doing our jobs. In the second set we went down on focus, down on our energy, we didn’t really talk to each other as much and played as individuals. Then we came back together at the end of the set and in the third set we pushed through it. It was an up and down roller coaster [Wednesday], but I think we were able to fight through it. It was definitely something good [after] our RHAM game.”

The first set was a masterclass from the Lancers, who thoroughly controlled every moment of the set en route to a 25-7 win. They made very few mistakes early on and built their lead very quickly as they played their best at the start of the game. The next two sets were much closer in score, but Eastern head coach Stefanie Reay believes this set was more representative of how the teams matched up.

“I think we were very, very focused in the first set, I think we started to lose a little focus in the second and third sets,” Reay said.

The Lancers lost the connection they had in the first set at the start of the second set as they trailed 10-8 early. Avon maintained its lead for much of the set, but fell off at the end and allowed Eastern to close the set on an 11-3 run to win 25-20. The Lancers did not play their best in this set, but kept Avon close enough to make the comeback once the Falcons left the door open.

Eastern improved its level of play in the third set, but Avon continued to keep the game close. The Lancers almost led the set from start to finish to complete the sweep, but a short run from the Falcons tied the game 22-22. Facing the pressure, Eastern locked in for the final three points to finish the win and take the third set 25-22.

Up next for the Lancers will be a road contest against Lewis Mills on Friday at 5 p.m.