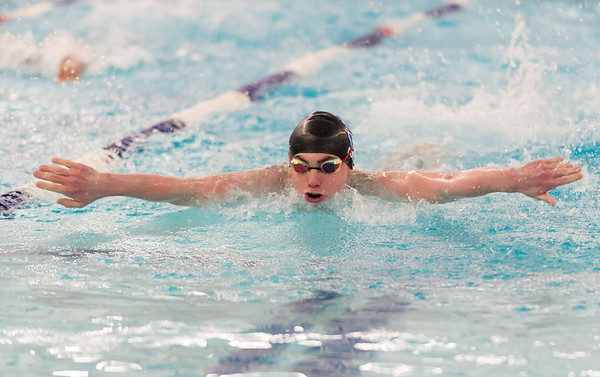 Southington's Colby Landon in the 200. | Wesley Bunnell Buy this photo 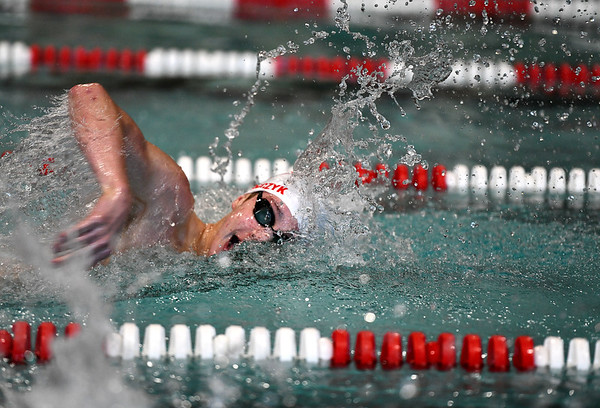 The 2021 boys swimming and diving season will be an important one for all who participated as it gave the returning athletes a chance to pick up where the season before left off. While this year did not end with a pool filled with students from all around the state, it was still capped off with everyone competing for statewide supremacy.

The Bristol co-op was led by a trio of talented swimmers who all found their names on the all-state list this season and contributed some record-breaking times to make history within their all-city team. Seniors Gabriel Bartolome and Colton Litwinczyk and junior Mikal Palaj were three pieces to an all-state medley relay team that posted the 11th-best time in the state ((1:39.48) and along with Drew Fries set a new team record in the event.

Bartolome also earned all-state recognition on his own, posting a 1:57.56 individual medley for the 13th-best time in Connecticut and a new team record. A leader for this team, he will be attending the Air Force Academy in Colorado next year.

“He is just very focused on what he wants and he’s comfortable with the uncomfortability of not knowing whether he’s going to get it or not and he just drives himself to get it,” coach Adrienne Bentley said.

Palaj notched two all-state times as an individual and cracked the top 10 with his 51.36-second 100 butterfly, which was eighth-best in the state. He also took 14th in the 500 freestyle with a time of 4:52.36 with both times setting new records in the Bristol program. With one more year of high school ahead of him, he has a chance to improve on those times and break his own records.

“He’s just a little powerhouse, he’s like the Energizer Bunny,” Bentley said. “He just keeps going, and going and when he says he’s tired, he still goes and does more. It’s going to be very interesting to have him back next year.”

A fierce competitor who won countless events for Bristol over the season as both a valuable part of relay teams and a solo swimmer, Litwinczyk was a leader for the team.

“He’s just a very unique person and loves to have fun, but knows when to get down to business,” Bentley said. “Sometimes he can get hard on himself, but over the past few years I’ve seen him take that a lot better. I’ve know Colton since he was little, I was his swim coach back then, and he had a tendency to get down on himself when he didn’t achieve what he wanted to do. I’ve seen him get comfortable and grow really nicely into accepting [his faults] and shooting harder to get there.”

Southington compiled another strong season in the CCC and was led by a pair of swimmers who cracked the all-state lists and conference competition.

Sophomore Alex Rosania displayed great skill from the diving board this year as he posted the fifth-best 11-dive score in the state with 463.90, which also set a new school record.

“He works hard and is incredibly coachable, being that last year was his first year ever competitively diving. We are truly excited to see what the next 2 years and more has in store for this young man,” head coach Evan Tuttle said.

Junior Landon Colby is the new record-holder for the best 100 butterfly in Southington history at 52 seconds, beating a time from 1992. Colby’s time was 13th in the state.

“His times were fast, really fast, right from the start of the season, and only got better each and every meet. In fact, he posted best times in every single meet this year. Capping it off with an historic final meet,” Tuttle said. “None of this happened by accident, but through his tireless work ethic and desire to be his true best, each day.”