Roundup: Bristol lacrosse comes from behind, run away with win in second half 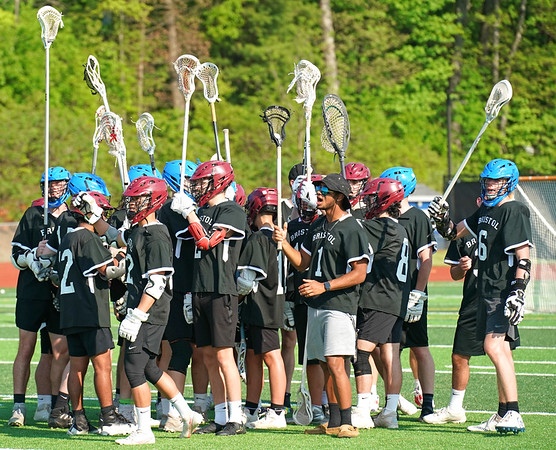 Bristol lacrosse huddles up during Wendesday's contest against. | Dan Heary Buy this photo
Published on Thursday, 20 May 2021 21:12
Written by

With Suffield leading at half 6-3 and in control of the game, Bristol saw the tide turn in the second half.

Four goals from Jeffrey Tallion helped put Bristol in a position to haul off with the win in the second half, doing so with an 11-1 run to dominate the final minutes.

Max Stavens stopped 14 shots in goal for the win.

Assistant coach Logan Geller had plenty to say about his team and the field managers who helped lock up a win.

ŌĆ£Attackman Ayden Cross, Nathan Shorette, Andrew Spina, and Tristan Kindblom managed the game perfectly up to the last second,ŌĆØ said Geller. ŌĆ£Spina made some incredible feeds while Cross tallied an absolutely beautiful behind the back goal. Shorettes speed is an asset that Bristol looks to employ throughout the end of their season. It is impossible to forget about the commanding midfielder DŌĆÖandre Wiggins. When he runs down the field the offense opens up and he simply facilitates every action carried out throughout the game.ŌĆØ

Brandon Frye shot a 33, Chris Millerick shot a 38 and John Gaffney shot a 43 behind Downes.

Matt Shewman scored a 35 to lead Canton. Ethan StaterŌĆÖs 51 was the team low for Torrington.

St. PaulŌĆÖs 163 beat a 193 from Daniel Hand and a 223 from Suffield for the meet victory. Medaling was Erin Downes, who shot a 35 for the Lady Falcons.

Sami Millerick and Olivia Dahn were behind Downes, shooting a 39 and 40, respectively. Quinn Burns shot a 49 for St. Paul.

Lucia Balzano led Hand with a 44 and Suffield was led by Courtney FaberŌĆÖs 49.

In the circle. Gonzalez allowed the one earned run.

Chase Prestia went the distance in the win, pitching six innings while striking out four. He allowed three hits, an earned run and walked two. He also contributed two hits at the plate

Alex Cappellucci finished the day 3-for-4 with two runs driven in.

Runs across the third, fourth and fifth innings helped St. Paul roll to its 18th win of the season.

Ryan Daniels scored on a Casey Cerruto RBI hit in the third. In the fourth, Owen Davis advanced to third on a sacrifice and scored on a Devon Kulas ground out.

Newington 3, Conard 1: The NorŌĆÖeasters needed four sets in the win over Conard, after falling in the first set 25-19.

Jacob Baclawski and Eni Lici were key for the NorŌĆÖeasters as Baclawski compiled 21 kills, six aces and seven digs, while Lici had 43 assists and five aces.

The NorŌĆÖeasters improved to 16-1 with the win.

Southington 3, Maloney 0: Connor McInnis tallied 10 kills and 10 digs to power the Blue Knights to the victory.

Wethersfield 6, Newington 1: Newington fell to Wethersfield in the final regular season match, falling 6-1 in a battle for the CCC North title.

Matt Utter was the only winner for Newington, going on to win 6-1,6-1 over Chance Krawczyk in singles.