After disappointment of last season, Bristol Eastern girls volleyball made sure it was winning some kind of title this year 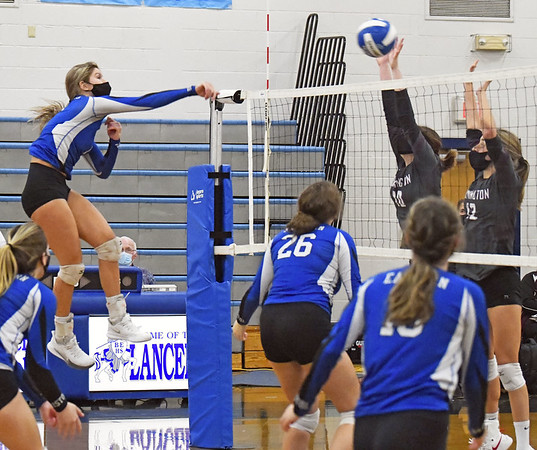 BRISTOL - Exiting last year‚Äôs state tournament two matches short of a championship appearance was an earlier departure than the Bristol Eastern girls volleyball team expected. It also was one it was not accepting, which heightened the desire for a title in the offseason.

As prospects of a complete season, or any season, became murkier, the team‚Äôs expectations became more measured within what was still possible. So while certainly not as exciting or challenging as the push for a Class L or CCC championship, the Lancers were set on dominating their localized schedule in 2020.

‚ÄúLast year, we only lost twice, but they were important times, so the girls got the taste in their mouths and they knew they didn‚Äôt want to be in that place again and that drove them the whole time,‚Äù Eastern head coach Stefanie Reay said.

After tearing through their regular season campaign and only losing just four set along the way, the Lancers nearly fell short of completing its undefeated run to CCC Region B title when it needed to win the final three sets in the first round of the postseason against Avon.

After completing the comeback and playing a fifth set for only the second time this season, the Lancers put an assertive finish on their season with a sweep of Farmington in the CCC Region B title match on Thursday. And even though there was no official hardware to be awarded, Reay presented each of her players with a small plastic medal to commemorate the season.

‚ÄúThey really, after last year especially, wanted a state championship and they really wanted a trophy,‚Äù Reay said. ‚ÄúSo I promised them they would get something and that was the best I could do. Along the lines of the silliness and trying to reduce their stress, that kind of just carried it through.‚Äù

It certainly seemed like it worked. During the shortened regular season, Eastern swept eight of its 11 opponents and when it came time to its postseason experience, the players wanted to make sure the team made the most of it.

Even in a year filled with plenty of challenges, the Lancers made sure to end the season with some kind of title and that, Reay said, had everything to do with the commitment the players we willing to put in during the offseason to make an unbeaten season possible.

‚ÄúIt‚Äôs 100 percent the girls, the parents supporting,‚Äù Reay said. ‚ÄúEverything we needed to do, they didn‚Äôt question anything along the way. Even starting in cohorts of 10, having to be half an hour in the gym and half an hour outside, they literally did anything and everything we asked them to do. It couldn‚Äôt have set us up better to be where we are.‚Äù