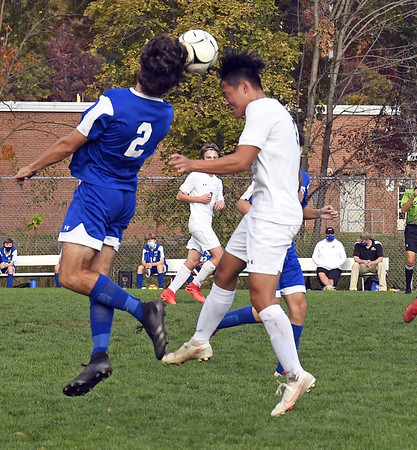 BRISTOL - It was a season unlike any other for the Bristol Central boys soccer team in 2020, fill with highs and lows, and plenty of uncertainty.

But through it all, the Rams made sure to cap off their year and head into the offseason on a high note.

Carson Rivoira scored twice and Umar Malik tallied another as Bristol Central beat crosstown rival Bristol Eastern 3-2 in the third-place game of the CCC Region B tournament on Wednesday.

“I’m just really proud of the way guys stepped up for the guys who weren't there,” Rams head coach Nate Jandreau said. “The way they responded to this game and this year has been amazing.”

Wednesday’s match was supposed to be played on Thursday, but a number of players and coaches, including Jandreau, had to quarantine due to contact tracing forcing the matchup to be moved up a day. That meant both squads would be playing back-to-back contests instead of having a day off in between matches.

If anything, it shows just how unpredictable this season has been. Both Bristol Central and Bristol Eastern had the start of their seasons begin later than the anticipated Oct. 1 start date, with the Rams having to wait two weeks.

“I really feel bad for the guys,” Jandreau said. “Mentally, they had to take a step forward and grow. We basically had a three-game week and a four-game week season and this tournament was supposed to be a normal-like week, but we played back-to back days.”

But despite the short rest, Wednesday’s match didn’t disappoint.

The Rams and Lancers traded blows in what Jandreau described as a slugfest throughout the afternoon.

Bristol Central scored first on Riviora’s first goal, only for Bristol Eastern to tie the game up less than a minute later on an equalizer by Connor Policarpio. Riviora later gave the Rams the advantage again, but the Lancers’ Tyler Borry tied the match up again with 18:50 left in the second half.

But as Bristol Eastern had done in the first half, Bristol Central returned the favor less than a minute later when Malik scored the go-ahead goal.

That turned out to be the deciding score, giving the Rams multiple wins over the Lancers in the same season for the first time under Jandreau’s leadership. Entering the season, Bristol Central had not beaten Bristol Eastern since 2016.

“It's not often you get to play your crosstown rival in the final match of the season,” Jandreau said. “It couldn’t have been better with everything that was happening. I’m really proud of our guys and it was a nice note to send our seniors out on.”

Newington 3, Berlin 1: Newington is heading into its offseason with plenty of momentum.