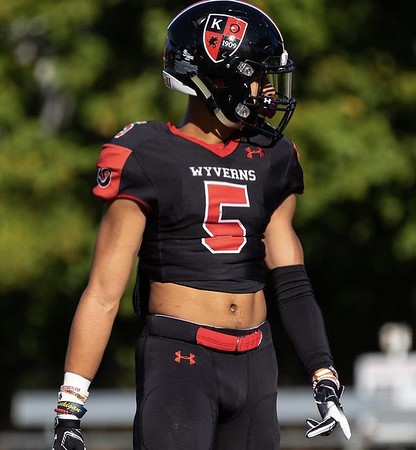 Jeffrey Davis Jr. during his time at Kingswood Oxford | David B. Newman Buy this photo
Published on Sunday, 1 November 2020 13:31
Written by RYAN CHICHESTER

BRISTOL – When the Connecticut Interscholastic Athletic Conference announced last month that it would be constructing a second semester season for sports that were not able to be played in the fall, particularly football, it gave a glimmer of hope for senior student-athletes who were hoping to take the field one last year before graduating.

For Bristol Eastern’s Jeffrey Davis Jr., he won’t have that chance. But it doesn’t mean he won’t be playing football.

Davis, who was preparing for his senior season with the Lancers after playing at Kingswood Oxford in West Hartford through last season, will be an early enrollment at Penn State next year, where he has a full scholarship to play football for the Nittany Lions, meaning come Jan. 18, his brief stint with Eastern will be over, but his playing career will be far from finished.

“The first week or so after I found out [the fall season] was canceled, I knew there was some protesting going on so I had some optimism they would chance the verdict and we'd have some kind of contact season,” Davis said. “So I was disappointed...being my last season and all, but I'm trying to look at the bigger picture and what I have coming.”

What is coming for Davis is spring football with Penn State before officially beginning his collegiate career next fall. Davis, who committed to the Nittany Lions back in August, received his first Division-I offer from Syracuse as a sophomore, before also getting offers from top schools like Notre Dame, Tennessee, Purdue, Rutgers, UConn, Yale and others. In his first year at Kingswood Oxford, Davis became the first student-athlete in school history to earn a varsity letter in football as an eighth grader, while lettering in basketball and track as well. Davis’ impressive student-athlete resume includes time with the Bristol Bulldogs when he was younger, and the 2020 season was supposed to be a return to the city before moving on to the big stage at Penn State. Instead, due to the coronavirus pandemic leading to the cancellation of full-contact football, Davis is representing the Lancers in 7-on-7 play each week.

Of course, Davis is doing much more to prepare for college than 7-on-7 competition. The cornerback’s schedule includes waking up at 5 a.m. every weekday morning to lift, then field drills immediately after school, working on conditioning, changing directions, backpedaling, and sometimes hill runs over at Bristol Central High School. Afterwards is team practice at 5 p.m., ending a 12-hour day.

Davis wished his week-long grind ended with Friday night football, but his excitement for Saturdays next fall offers more than enough motivation to get out of bed before the sun rises.

“Obviously it's not what I envisioned,” Davis said. “I was really looking forward to playing high school games under the lights, because at prep schools we weren't able to do that. I was looking forward to that. But I'm using this as time to hone my craft and get stronger. I'm always in the gym and still have the 7-on-7, so I'm just using this time to get better.”

Davis regularly keeps in touch with his coaches at Penn State, including head coach James Franklin. Strength and conditioning coaches provided Davis with workouts to keep him progressing through the spring and summer quarantine months, back when other student-athletes were left scrambling for ways to be seen by college coaches while the outlook for a normal football season looked more and more bleak. Davis feels for each of his Eastern teammates that are trying to put together film for college coaches, and takes gratitude in the knowledge that his next step is already in place.

“It's definitely a blessing knowing I have a spot on a roster and will continue playing at the next level,” Davis said. “There are a lot of guys on my team looking at this year to get some film together and play in front of coaches. I know they have some camps set up, but it's not the same. It's great to know I'll be playing at the next level and not worry about where I'll be for the next four or five years.”

Bristol won’t have the chance to see Davis return to his home city and put on the silver Lancers helmet, but come next fall, they can watch him in the Penn State whites as he begins the next phase of his football career.

“I'm really looking forward to it,” Davis said. “I'm just trying to be in the best possible shape I can be come January and be ready.”