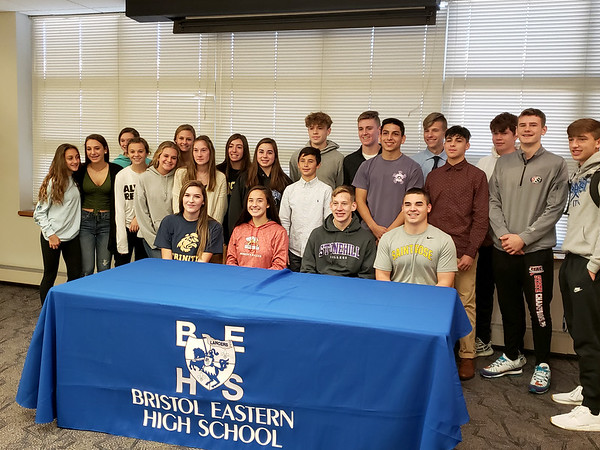 BRISTOL - After displaying top performances for consecutive years four Bristol Eastern athletes will take their talents to the NCAA and continue their careers as student-athletes.

Woznicki’s All-American performance as a senior earned him the opportunity to play for Division-II Stonehill College in Easton, Massachusetts the next four years. He set a school record by scoring 39 goals this year over 20 games and led the Lancers to an undefeated regular season and an appearance in the quarterfinals of the Class L state tournament. He served as the focal point of an offense that outscored opponents 59-8 this year.

D’Amato was an integral part of the Lancers’ offense and after one more year in Bristol is moving on to play for the College of Saint Rose in Albany, New York. The second baseman helped Eastern rebound from 11 consecutive losses and reach the quarterfinals of Class L playoffs last season.

Policarpio was a captain on a Lancers team that reached the Class L state tournament for the eighth consecutive season and will be attending Division-II Seton Hill University in Greensburg, Pennsylvania. She scored a team-leading 10 goals this season, including three game winners along with posting six assists and received all-conference honors for the third time.

“Leah came in pretty dynamic right off her freshman year,” girls soccer coach Scott Redman said. “She tore her ACL and lost her sophomore year so to see her rebound and come back to the really high level she performed at from when she was younger was really nice to see… Her maturity as a player and person was a really good journey and it wasn’t easy considering the major injury she suffered her sophomore year.”

Redman also serves at the helm of the Lancers’ softball team, which will export Girard to Division-III Trinity College after this school year. Girard has earned three All-State selections in three years with the Lancers and is coming off of 15-5 season with a 1.91 ERA, 1.29 WHIP, 142 strikeouts and just 29 walks in 117 1/3 innings. As a batter, she posted 17 hits and 11 RBI.

“Erin lives, breathes and eats softball,” Redman said. “She plays year round [and] trying to get her to take some time off to keep her body healthy and strong is always a challenge... A three-time All-State in her first three years of high school, [so] she’s obviously performing at a really high level. I’m excited to see what she can do with her senior campaign, especially now that she has the stress of where she’s going to go to school off her back. She can go out there and have some fun this year I think. She’s a true competitor, she hates losing. She wants everything to be perfect so she’s always striving to get better and be perfect.”

Redman added he believe both of his players are set up for immediate success at the next level.

“I think both are really hard workers and when you go into college the program is very consistent,” he said. “[Everybody] is going to work hard, they’re all going to push you, you’re going to have really good players around you that are going to push you to get better so I think that both of them will step their game up [and] get back to that grind mode where you have to work for every minute, every opportunity. I think both are very capable, especially considering where they are going to earn some playing time right off the bat and really contribute to their teams. I’m really happy with the decisions they made, I think that they’re happy with where they’ve ended up and I think it’s going to be a good fit for them.”