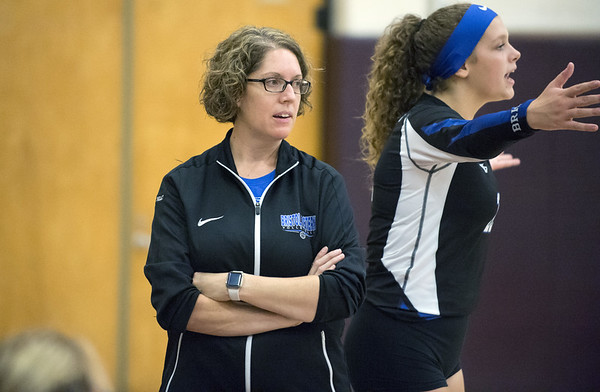 NEW BRITAIN - Taking over a high school program as a first-year head coach often means the start of a new era, or the beginning of a rebuild. Whether it’s a culture change or an altering of preparations, a new coach is usually asked to bring about plenty of change for a team that needs it.

This hasn’t been the case for Stefanie Reay in her first season as the Bristol Eastern girls volleyball head coach.

The Lancers, fresh off of a trip to the Class L state semifinals, said goodbye to head coach Stacy Rivoira at the end of last season after Rivoira won multiple state titles during her 14-year tenure. Reay, who was Rivoira’s JV coach for four years, was brought back into the Eastern volleyball program to continue an era of success rather than start one from scratch.

Taking over an established program may seem like an easier task than overseeing the early stages of an all-out rebuild, but if you ask Reay, it’s anything but.

“Stacey’s done a really nice job of preparing these girls,” Reay said. “But it’s a little more nerve-wracking since the expectations are so high, rather than just walking in and building it up.”

Despite some lingering nerves about living up to the sustained success the Lancers enjoyed under Rivoira, Reay’s relaxed demeanor prevails, especially on the sidelines when Eastern is in action. Reay doesn’t have to change much about a program that is a state tournament fixture, but her even-keeled coaching style is a bit of a change from Rivoira’s fiery spirit.

“I tend to have a little more laid-back approach, which may be good or bad,” Reay said. “(Rivoira) was very demanding of the girls, which I think they thrived under. So sometimes I find myself needing to work on that a little bit.”

The Lancers certainly responded to Rivoira’s intensity, but they’ve been equally receptive to Reay’s calming presence, as Eastern has stormed out to a 2-0 start and have its sights set on another deep state tournament run come postseason time.

“She’s a great coach,” all-conference junior Zoe Lowe said of Reay. “She gives us a lot of feedback and pushes us really hard. It’s different from what we’ve had, but she made sure we knew that she wanted to be here and was very dedicated.”

The transition has been an easy one for everyone involved, especially Eastern’s core of upperclassmen that came up through the JV ranks under Reay, and now have a familiar face pacing in front of the team’s bench. The coaching style may be different from what they had last year, but it’s still a familiar face, and one that the team trusts, and vice versa.

“I know a lot of these girls,” Reay said. “It makes it a lot easier to step in since I know them and have a relationship with the girls. Other than the expectations, it’s been pretty easy.”

It also helps that Reay was just as familiar with Rivoira, who served as a mentor for four years and helped instill the keys to coaching a winning program. Even when Reay stands quietly in situations when Rivoira might have provided a disciplinary rant, Rivoira’s lessons still sit in the front of her coaching consciousness. Reay is laid-back, but internally, she shares the same fire as Rivoira, and plans to lead the Lancers to a similar string of success with her mentor’s teachings in mind.