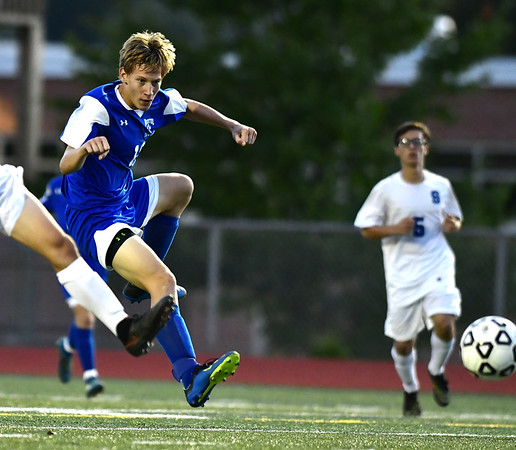 In the first half the Lancers controlled the game offensively and capitalized on a pair of their opportunities.

Jake Woznicki gave Bristol Eastern a 1-0 advantage 23:55 into the game and just over 10 minutes later Elijah Parent buried the Lancers’ second goal off an assist by Woznicki.

At the half Bristol Eastern held a 2-0 lead and another shutout was looking likely.

“I thought our offense really clicked in the first half,” Lancers head coach Bill Sweet said. “I thought we moved the ball really well. In the second half we moved the ball fairly well, but left it in the middle too much so they could come down on us.”

Holding the two-goal lead, the Lancers started getting more push on their end of the field as the Blue Knights’ offense came to life.

Southington pressured Bristol Eastern in the second half, especially down the stretch with the clock ticking.

While the Blue Knights couldn’t capitalize for most of the second half, with 12:54 remaining in the game Collin Burdette trimmed the deficit to just one as he buried a goal off of an assist from Joseph Tellerico.

“I thought our guys played a good second half,” Southington head coach Dave Yanosy said. “Unfortunately we dug a little bit too big of a hole. I think Bristol Eastern played a really good first half, they worked extremely hard, they were opportunistic and they cashed in on a couple of goals and that ended up being the difference.”

Burdette’s goal was the second allowed by Bristol Eastern over the past eight games.

With the one-goal lead, Lancers sophomore goalkeeper Nate DiLoreto stayed poised in net and made big saves down the stretch to keep the Blue Knights off the scoreboard the rest of the way.

DiLoreto finished the game with 11 saves for Bristol Eastern.

“We’ve been doing good so far this year,” DiLoreto said. “There’s definitely a few things we still need to work on but as Dante [Costantiello] said, it’s a team game and we’ve been working good as a team so far and I think we can keep getting better.”

With the win, Bristol Eastern moved to 7-2-1 on the season and will travel to take on Newington on Friday night.

Southington fell to 2-6-2 on the year with the loss and it was yet again another close one for the Blue Knights that didn’t go their way.

“We’ve had a handful of ties and a handful of one goal losses but we’ve got the ability,” Southington head coach said. “We’ve just got to put together the 80 minutes and almost bottle up what we did for the last 40 and do it for the full 80 and I think we’d be okay.”