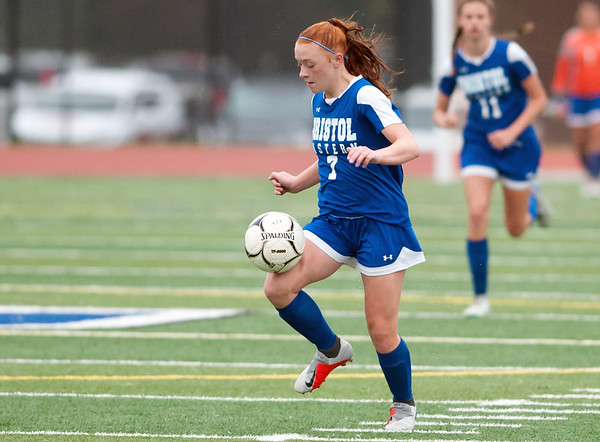 BRISTOL - Six games into the season, the Bristol Eastern girls soccer team was still fighting for its first win.

It finally came against Middletown and then the Lancers followed it up with a second straight victory against Platt on Monday.

“We needed that first one. It took awhile for us to get in the win column,” Bristol Eastern head coach Scott Redman said. “That first one definitely helped against a team a lot of people didn’t expect us to beat, even though we know we could if we played our game. All year we’ve played at a higher level against better teams and then against some teams that aren’t performing as well, we’ve struggled.”

While the Lancers were held out of the win column to start the year, two of their losses were by one goal and two of the other games ended in draws, against Berlin and Bristol Central.

But the wins over the Blue Dragons and Panthers aren’t the most impressive, as the two have combined for a 4-12-1 record this season.

Middletown has three of those four wins, but Redman wasn’t taking the win over Platt for granted despite the 7-0 scoreboard and domination by his team.

“Platt is a pesky team. They’ve had some up and down results like us, but we played well and we kind of dictated the pace of play,” Redman said. “The conditions were a little bit harder to deal with and some of their skill players were a little bit frustrated by that and weren’t able to do some things on the ball that they normally could.”

Down the stretch two of the final three games are against Plainville (4-3-2) and South Windsor (6-2), both strong opponents.

The middle of the schedule sets up Bristol Eastern with an opportunity to enter that stretch run in good position to qualify for the state tournament and finish the season battle tested for the postseason.

Getting that first taste of victory was a refresher.

“It’s good, even just seeing them now enjoying the victory. We were kind of getting down on ourselves a little bit and dumping that Enfield game was real frustrating for them,” Redman said. “It was a long bus ride home, but getting a win at the end of the week last week was huge and then backing it up [against Platt] was big.”