Legacy makers; Runner-up finish for Rams conclude a season of many firsts 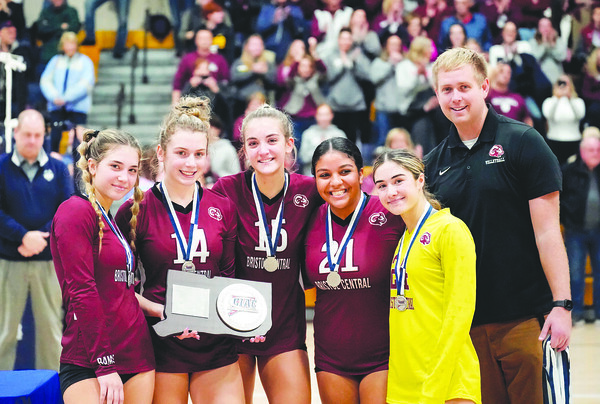 The Bristol Central Rams‚Äô historic season came to a close Saturday afternoon as the Rams were defeated by the Joel Barlow Falcons 3-0 in the Class L State Championship. Despite finishing as the Class L runner-up, the Rams accomplished what no team in Bristol Central history has ever done before.

The Rams not only achieved getting to the school‚Äôs first ever state championship, but they also did so by having five all-conference players, beating Bristol Eastern for the first time in 28 years, winning their conference pod as well as defeating the two-seeded Suffield Wildcats and the three-seeded East Lyme Vikings on their way to the finals.

The Rams will also now place the first volleyball trophy in the Bristol Central trophy case.

Bristol Central coach Lance Pepper said it is going to take time to reflect on how much they accomplished this season.

‚ÄúIt‚Äôs surreal. I told the girls when you think about Bristol Central Athletics you never thought of volleyball and it‚Äôs because of them that we‚Äôre here,‚Äù Pepper said. ‚ÄúThey have absolutely nothing to hang their heads on. To put a trophy in our trophy case is something that I don‚Äôt think a lot of our kids could dream of.‚Äù

Despite the final score, the Rams competed with the Falcons until the very end. Barlow won the first set 25-13, but the Rams hung around with the eventual champs until the bitter end.

Tied at 20 in the second set, the Falcons pulled away from the Rams to ultimately win 25-20. However, in the third set, the Rams came from behind 19-13 to tie the game at 19. Bristol Central even took the lead for a brief moment at 23-21, but simply couldn‚Äôt close the door before Barlow roared back and won 25-23.

Pepper said there‚Äôs a reason why Barlow was the number one team. He said they were a scrappy team, that never gave up ssand ran a fast tempo offense, one which the Rams hadn‚Äôt seen before.

‚ÄúThat‚Äôs been the story of our season,‚Äù he said. ‚ÄúThe fact that these kids come in work their tails off, day in and day out and they never give up. They were down 19-13 and all of a sudden, its 19-19. It‚Äôs just incredible.‚Äù

Pepper said seeing where they started as freshmen to where they are now is not only a testament to the work they put in, but the foundation they have laid.

‚ÄúThey just worked their tails off and that‚Äôs all I can ever ask for from any of these kids,‚Äù he said.

Pepper added that ‚Äúthe future is bright.‚Äù The Rams will be returning key contributors including Grace Higgins, Alex Rivera and Lily Kirk.

‚ÄúReturning those three pieces are huge,‚Äù Pepper said. ‚ÄúI think Lily really found her way in the playoffs and the experience is something you can‚Äôt take away from these kids.‚Äù