BC football reflects on historic season for program 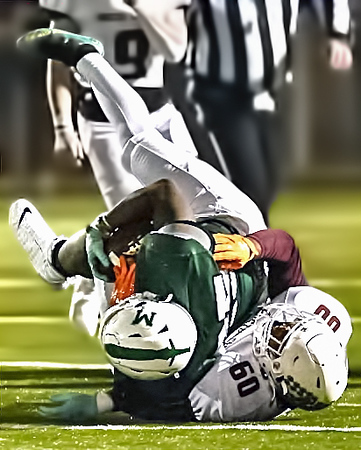 Bristol Central‚Äôs storybook football season came crashing to an end Tuesday night with their 49-14 loss to Maloney in the CIAC Class L Playoffs. The Rams finished with a 9-2 mark and a school record-tying nine-game win streak.

While the final game result was not what they dreamed off, the Bristol Central seniors nevertheless recognized the remarkable accomplishment of a team that had not been near the game of football for nearly two years when they started the season.

‚ÄúWe really formed a brotherhood,‚Äù said senior captain Victor Rosa. ‚ÄúWe formed memories we will never forget. No one believed in us at the start of the season but we put together an historic season that will never be forgotten.

Damion Glasper, who did not come out for football as a sophomore, made a decision to return to the game for his senior year and became a key cog on both sides of the ball. ‚ÄúI came back because deep down, I missed the sport‚Äô‚Äù Glasper said. ‚ÄúFootball has always been a love of mine and I didn‚Äôt want to have regret not playing my senior year.

‚ÄúAlthough we didn‚Äôt get the main goal this year, our team accomplished a lot,‚Äù he added. ‚ÄúWe went 9-2 and we‚Äôre the first team in 37 years to make playoffs. I‚Äôm glad I decided to come back. The bonds and friendships I reconnected are what I‚Äôm going to cherish the most in the future.‚Äù

Glasper was the team‚Äôs top receiver with 26 catches for 417 yards and three touchdowns. His big 50-yard reception helped set the Rams up for their first touchdown in the playoff game as they pulled to within one score after a very tough start.

Malachi Jones another senior captain, who enjoyed a stellar night on the line despite his team‚Äôs loss at Maloney, he got his first opportunity as a starter in his senior season and he became a dominant force on the line.

‚ÄúIt was my first varsity starting chance and I wanted to make the most of it,‚Äù he said. ‚ÄúI tried to do my job the whole season keeping the team up and keeping them focused, Every time we got a little bit down I tried to pick us up and keep the game alive for everyone.‚Äù

Jones, Glasper and Rosa were among the eight Bristol Central players named to the CCC All-Conference team. Rosa is a candidate for Gatorade Player of the Year in Connecticut. He rushed for 132 yards and two touchdowns in the playoff game, bringing his season total to 2,730 rushing yards which places him second behind Tim Washington on Bristol Central‚Äôs all-time rushing list. The total also brought him into the top ten all time in the state of Connecticut.

His 41 rushing touchdowns fell one shy of Washington‚Äôs school record and ties the legendary Arkeel Newsome of Ansonia for 12th place all time in the state.

‚ÄúI couldn‚Äôt thank my line enough for all of the support they gave me this season,‚Äù said Rosa. ‚ÄúOur entire offense did a hell of a job blocking all season long.‚Äù

Rosa completed 59 of 92 passes for 849 yards and eight touchdowns in addition to his running game, giving him a total offensive output of 3,579 yards and 49 touchdowns for the season.

The playoff loss was a disappointing end for the Rams, especially since they did not play up to the level they have performed at all year. Five first half turnovers forced the Rams to change their style of play

‚ÄúThe turnovers really hurt,‚Äù said coach Jeff Papazian. ‚ÄúThey were uncharacteristic of what we‚Äôve been all season long. Those early ones really stung because it took us out of what we wanted to do and a style we are used to and forced us into trying to be a team that we‚Äôre not. We had to play catch up and we did some things we haven‚Äôt done before and things just spiraled out of control.‚Äù

‚ÄúCredit Maloney,‚Äù Papazian added. ‚ÄúThey pounced early and took us out of our rhythm. They took away our ability to play the style of game we wanted to. They‚Äôre athletic with speed across the board. There are eleven good athletes on that defense. The lanes closed up pretty quickly.‚Äù

Rosa echoed his coach. ‚ÄúThey were ready for us,‚Äù he said. ‚ÄúWe knew we could compete with them, but we didn‚Äôt have our best game. It just wasn‚Äôt our night.‚Äù

But it was their season. The 9-win effort matches the best on school history and it is an achievement that the seniors will always have.

‚ÄúEvery week was a playoff game for us after that opening loss to Bloomfield,‚Äù said Papazian. ‚Äú8-2 would not have gotten us in so every game we played was a must win. These kids rose to the occasion week after week and I am going to remember them for a long time to come. They‚Äôve taken us on an incredible ride these last four months and they did something special that hasn‚Äôt happened in a long time around here.‚Äù