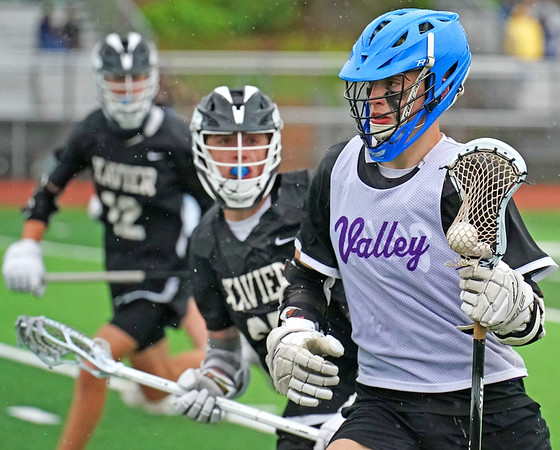 BRISTOL – Alumni Field at Bristol Eastern served as the site for the first boys lacrosse playoff game in Brtistol history and the energy was high as the 15th-seeded Bristol co-op hosted 18th-seeded Xavier in the qualifying round of the Class L state tournament.

Bristol struggled to have its energy manifest as success on the field, however, as the heavliy-experienced Falcons scored the first six goals of the game and spent the majority of the game on offense en route to a 18-3 win. Bristol’s first season as a co-op is now over with a 7-5 while Xavier moves on to face second-seeded Amity, but the team is proud of its accomplishments and growth this season.

“We definietly came in with a lot of preparation,” senior defenseman Jack Stavens said. “We knew what this team was going to be about and obviously the result wasn’t want we wanted, but stepping up to that moment and knowing the environment that we were going to be in and the talent we were going against is the biggest thing.”

Bristol’s defense was put to work during this contest as sophomore goaltender Max Stavens finished the game with 14 saves while facing an onlsought of shots.

“They were talented, good shooters, but they played pretty great defense almost the whole game,” Stavens said. “Possession wasn’t the way we wanted but it was what it was.”

Xavier freshman Nicholas LaRosa dominated the faceoffs early, giving his team repeated opportunitie to score. Bristol’s defensive players tried to interfere with their opponents as much as possible, but were overmatched by the firepower of the Xavier attack.

“Defensively, we tried to put a little scheme in,” head coach Bill Els said. “I knew if we played them man- to-man that they’re probably a better team. We put a zone defense in yesterday to just do something because we knew we had to change it up.”

Seniors Austin Salzillo and Jeff Tallion, along with junior Ayden Cross, all found the back of the net for Bristol. The scoring opportunities were minimal as Xavier consistenly forced turnovers in the middle of the field, but Bristol displayed moments of togetherness offensively to get three shos past goaltender Ian Domeika.

With the season now finished, the returning players will look to build off this success next year, but everyone from this team will always remember making history for both high schools in Bristol.

“We just love playing the game and we love playing with each other,” Jack Stavens said. “We have so much chemistry, some of us from years back and some from just this season, but we’re such good friend and we’re all so close to each other that when one of us succeeds or one of us makes a nice play, we’re all excited.”