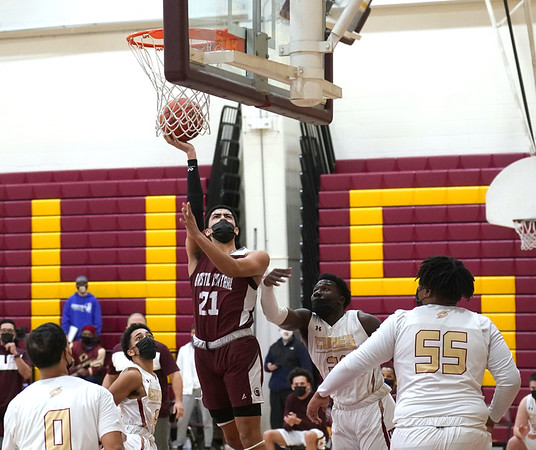 He started the day by finalizing his commitment to play football for Curry College next year and then followed that up with a game-high 17 points on five three-pointers in the Rams’ boys basketball team’s 60-33 win over New Britain.

“This whole week I was going in the gym early, getting up extra shots, just trying to get my shot improved because I hadn’t made one three in [our] first three games,” Rodriguez said. “But I’m shooter, so I just kept shooting it and just kept trying to work on my form.”

Central remains undefeated at 4-0 behind eight made threes, a 15-point, 14-rebound and seven-block game from junior Donovan Clingan and 11 points and five rebounds from senior Sean Wininger and showed their versatility when Clingan does not dominate the paint.

The Hurricanes fall to 2-3 on the season and received scoring from three players for most of the first three quarters. Senior Justice Carter was held to two points in the game while Jayden Andujar led the way for his team with 13 points, anchored by a strong second quarter and Xavier Goode added nine.

“We’re not at full throttle,” New Britain coach Kurt Reis said. “The kids that played, that we put on the floor, they did what they can and they played to the end. They had a six-point game, we didn’t make a couple of plays and they converted those on the opposite end. We had it to six. If we had kept to six all game with an opportunity to win, they have a seven-footer that changes the game, you have to be efficient on offense.”

Both teams got off to slow starts offensively until Central head coach Tim Barrette called a timeout when trailing 4-1. The Rams proceeded to go on a 15-0 run over the rest of the quarter as their offense started to come together despite just two points from Clingan. Wininger and D’Ante Ross opened up their team’s scoring with layups to preface a barrage of three-pointers. Rodriguez checked into the game for the first time and knocked down threes from the left corner on consecutive possessions and Piotr Nizielski made one on the possession after.

The Hurricanes’ offense found its stride in the second quarter on the back of Andujar, who scored 11 of his team’s 13 points in the period. Andujar took advantage of Clingan being on the bench and converted some challenging attempts at the basket. He also drilled a floater over Clingan that he lobbed, high up and over the outstretched arm of the seven-footer.

“We didn’t stop the ball,” Barrette said. “Donovan makes up for a lot of our mistakes behind us. As a guard group we have to do a better job of containing the dribble. When he’s not in the game we have to be able to contain the dribble because we don’t have the eraser behind us.”

Clingan was held scoreless in the second quarter as, but Central was able to keep New Britain at bay with more long-range shooting. Rodriguez added another and Wininger made one as well as part of his seven points in the quarter.

The Rams offense began to find more success through Clingan after halftime who posted six points in the third quarter, highlighted by an alley-oop in which Damion Glasper snuck a pass off the backboard to Clingan for a dunk.

Rodriguez continued to lead the scoring as the Rams added to their lead in the second half. Andujar went quiet for the Hurricanes, only posting two more points after his big quarter, as the team struggled to keep up with Central’s multifaceted scoring attack.

Up next for the Rams is a home game against Lewis Mills on Friday at 6:45 p.m. while the Hurricanes will host Bristol Eastern the same day.