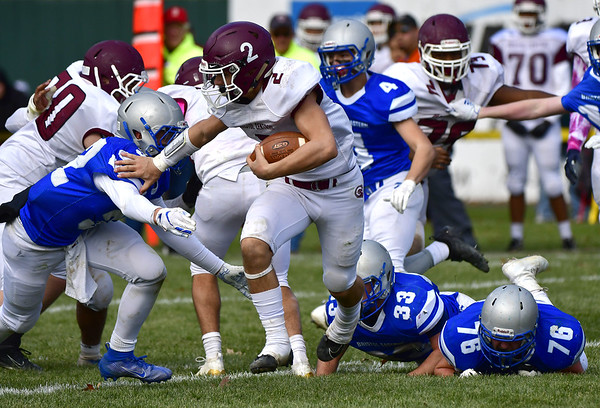 The quarterback/wide receiver/cornerback/athlete received an offer to play football at Columbia University on Saturday. This is his second Division I football offer after getting his first offer from UConn in October.

Columbia, an Ivy League and FCS school, does might not play the same competition as a school like UConn, but with his 4.3 GPA, Rosa will have options that allow him to think beyond his football career.

Rosa may not be able to create new game film to send to college coaches, but he has strong resources to help him make connections with recruiters so he can have a variety of options to choose from when the time comes. In addition to Central head coach Jeff Papazian, Rosa is also part of an athlete mentorship program called Supreme Athlete that helps him both with physical training and recruiting.

“My head coach emailed them (Columbia) a couple of months ago; they said they liked my film,” Rosa said. “Then it died down for a little bit and then it picked back up recently. They started texting me and Twitter DM’s; they’re contacting me and then eventually we got a phone call.”

Obviously disappointed his opportunity at a spring football season was taken away after waiting for many months, Rosa is not discouraged by his circumstances. After rushing for 1,146 yards as a sophomore, he is looking to grow his skills to become the most desirable prospect he can be. In lieu of having tackle football, he joined the Supreme XL seven-on-seven team, which will give him the opportunity to get on field work and hone his skills at the positions he would likely play in college.

“Even without football, I’m going to continue to work every day,” Rosa said. “I’ve been in the gym six times a week and I’m just going to continue to work. I’m on Supreme XL seven-on-seven team and we’ve been practicing. I’m just going to keep on working and putting myself out there on Twitter, I know Twitter is kind of the hot spot for recruiting right now during these times. So I’m just continuing to do that and work.”

With the hopes of getting one more full season of football in before deciding on a college, Rosa has full confidence in his abilities to garner more attention and remains thankful for what has already come his way.