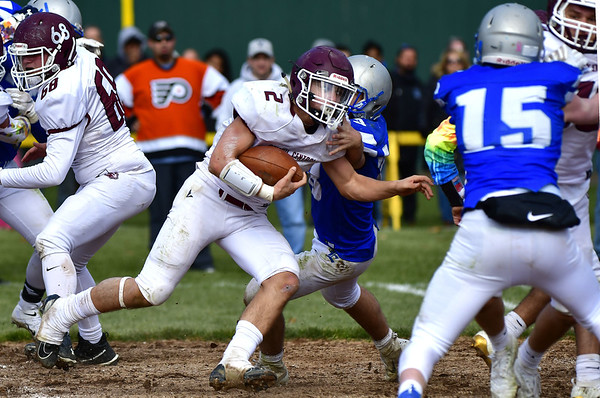 Bristol Central's Victor Rosa, middle, scores a TD during Battle for the Bell against Bristol Eastern in 2019 | Mike Orazzi | File Buy this photo

Area football players and coaches have endured a roller coaster ride through the coronavirus pandemic, embracing optimism for a fall season, then a spring season, with peaceful protests scattered in between.

But the sport saw its obituary for the academic year written off in the offices of the Connecticut Interscholastic Athletic Conference on Thursday afternoon, as the CIAC voted to cancel the alternative season after clearing winter sports to begin its regular season on Feb. 8. With winter sports being pushed back to an end date of March 28, the second semester season that would have given football teams some sense of a season was canceled due to a lack of time in between winter and spring sports to pull it off.

“For me, the more things drug out the more the writing was on the wall that this day was going to come,” Bristol Central head coach Jeff Papazian said. “I feel badly for my players. A lot of them have reached out already and I'm just trying to help them with whatever comes next. It's been hard. This year has been hard for a lot of reasons and this is certainly another one of them.”

Papazian, who has dealt with disappointed players since this past fall, shares his relief for those who will get to play high school sports in 2021, but the knowledge of the field lights remaining off on Friday nights is a brutal reality to accept.

“I think first of all, I'm happy that there are sports that looks like will be able to go in pretty short order,” Papazian said. “We know that kids need sports for a lot of different reasons. That's been evident throughout this whole process.”

Football players have had discussions with CIAC executive director Glenn Lungarini at the CIAC offices when the season was initially in doubt, and later held another peaceful protest at the Capitol building in Hartford back in September after the CIAC canceled the season. The CIAC then left the door open for a spring season, but that slammed shut on Thursday, as the CIAC stressed the importance of giving spring athletes a full season (which will begin on March 29) after they lost their entire season last year.

Now, it will be football players joining spring athletes from earlier this year on the list of those who lost an entire season due to the covid-19 pandemic.

“I don't know what comes next, to be honest with you,” Papazian said. “I want to be there for those guys that are hurting and have lost so much. That’s my focus right now. Hopefully spring sports get rolling too. It’s not football, but kids need sports and a lot of my guys are multi-sport athletes, and they can get back out there and start competing.”

Football wasn’t the only casualty with Thursday’s announcement. Wrestling, deemed a high-risk sport, will not have a season this year after it was decided that competition would be unsafe through the duration of the winter season. With the alternative season gone, there is no time to fit in a wrestling campaign, leaving grapplers with only non-contact skill work through the month of March.

“We're all really disappointed for the kids, especially the seniors,” Southington head coach Derek Dion said. “They're not going to be able to see the fruits of their labor. But we have to play by the rules.”

Dion, a member of the CIAC’s wrestling committee, met with fellow members to put together potential mitigating strategies for the 2021 season, including keeping athletes in pods to limit crowding and make contact tracing easier, but with Department of Health recommendations listing the sport as high risk, the CIAC moved to cancel competition for the sport, while competitive cheer and dance both met the same fate.

“I don't understand how they can allow basketball and not wrestling, and especially not cheerleading or dance,” Dion said. “That's astounding to me. Wrestling is 1-on-1 and basketball is 5-on-5, and if you’re gonna tell me they're not right in each other's faces, you're kidding yourself. Not that I want basketball to not have a season, but to tell me they can have a season and a sport like cheerleading and dance can't, you can't tell me there's less contact in basketball than cheerleading. It doesn't make sense to me. The decisions being made are just disappointing.”

Coaches who are now dealing with a lost season can empathize with the spring sports that were completely canceled in 2020, and understand the CIAC’s desire to keep the upcoming spring season uninterrupted, but now facing a full calendar year without their own sport as well, some were hoping for some kind of common ground.

“Speaking for myself, I would have made accommodations in the fall or in the spring for us all to try and get a season,” Berlin football head coach Joe Aresimowicz said. “I understand the aspect of trying to keep it fair. Now the only one that hasn’t missed a season is in the winter. I was hopeful we could all accommodate each other because it’s about the kids … and give them the chance to do all the sports that they love.”

Now, the attention for those coaches turns toward the players, who fought for a season for months, but will now have to wait until next year to return to the field or the mat.

Some may now not get that chance at all.

“We had two seniors this year that were injured and would have placed [at the state tournament] last year,” Dion said. “Now they don't have the opportunity to place this year. It's heartbreaking for those kids. It's just disappointing.”

For those who will return, there will be challenges players and coaches never faced before.

“Fall is a ways away,” Papazian said. “Our juniors this fall have never even been to a varsity practice. The last time they played football were as freshman. It's going to be weird. It'll be interesting to see how it shakes out.”

Berlin will face similar challenges this coming fall, when it will have been nearly two years since there was football at Sage Park.

“We are going to put four athletes on the field in the fall that have seen any varsity time at Berlin,” Aresimowicz said. “It’s going to be a huge adjustment for the kids and the coaches, and it’s going to be a lot of work.”