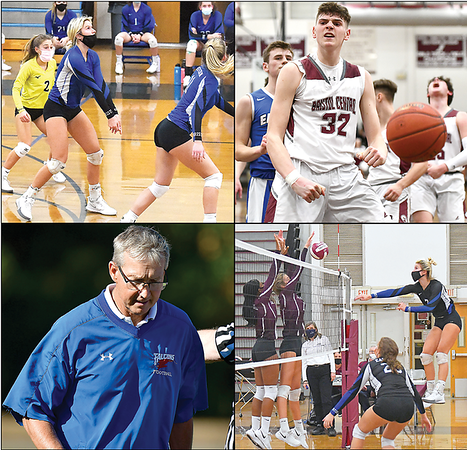 BRISTOL - The sports scene simply wasnâ€™t the same in Bristol this year, or any city for that matter. But in Bristol specifically, high school sports were shut down for nearly seven months, while the Bristol Bluesâ€™ season was canceled after what was supposed to be the teamâ€™s inaugural season in the New England Collegiate Baseball League.

Looking specifically at high school sports, Bristol didnâ€™t get to see any spring rivalries between Bristol Eastern and Bristol Central, and the soccer and volleyball bouts in the fall had to be held with limited spectators, nowhere near the usual atmosphere for those rivalry games.

Despite all of the necessary cancellations and precautions as a result of the coronavirus outbreak, there were still plenty of worthy moments to look back on during the shortened 2020 year for high school sports.

Here are the best in Bristol from the calendar year:

The girls volleyball season was at serious risk before getting the green light, and once it did, three Bristol Eastern players were acknowledged among the best in the country.

Zoe Lowe, Ryley Plourde and Leah Chipman all were named to the Under Armour All-American watch list, representing a stacked senior class for the Lancers. The trio certainly didnâ€™t disappoint, all making this yearâ€™s All-Press team and leading Eastern to a dominant season. More on thatâ€¦right now.

LANCERS DONâ€™T KNOW HOW TO LOSE

Led by Lowe, Chipman and Plourde, Eastern didnâ€™t lose a match through the entire 2020 season, leading to a victory in the CCCâ€™s Region B championship match, which the Lancers won in a clean sweep over Farmington.

For Eastern, it was a chance at redemption after a dominant 2019 season ended in disappointment in the Class L state tournament, and while the team didnâ€™t get a chance at revenge on a state level this year, it still walked away with a championship victory.

Part of what made the Eastern girls volleyball teamâ€™s shortened season even more special was the play of Lowe, who picked up her 1,000th career kill in the second set of that championship match against Farmington.

It was far from a certainty that Lowe would be able to reach the milestone considering the shortened season, but the senior rose to the occasion and became the first player in program history to reach that mark, and will graduate as one of the best the school has ever seen.

The Lancersâ€™ perfect season, and their historic domination over their crosstown rivals, was in deep trouble during a regular season match in late October. After leading 1-0, Eastern watched Bristol Central rally to take the next two sets, putting the Rams on the brink of finally ending their dreaded losing skid against the Lancers, but the match was far from over.

Eastern battled back to the third set with a 25-18 win, then finished the comeback with a 15-10 victory in the decisive fifth set. It marked the second straight year that the two teams battled through a five-set classic.

The Central girls volleyball team was unable to end its losing streak against its rival, but the boys soccer team did on Nov. 11, beating Eastern 3-2 in the third-place game of the CCC Region B tournament. For Central, it was the teamâ€™s second win over Eastern that year, the first marking the first time since 2016 that the Rams beat the Lancers, and the second victory was the first time the team won multiple games against Eastern in the same season in all of head coach Nate Jandreauâ€™s tenure.

DILORETO FINDS THE BACK OF THE NET

One week before its tournament loss to rival Central, Eastern boys soccer saw some history thanks to All-State goalkeeper Nate DiLoreto, who became just the second goalie in program history to score a goal when he did so against Farmington on Nov. 4.

DiLoreto, whose tally helped salvage a 1-1 draw, became the first Lancer goalkeeper to get in the scoring column since Ben LaVallee did so in the Class L state tournament back in 2010.

Donovan Clingan has a stack of Division I offers waiting for him, and also has a growing tophy case that includes the MaxPreps Athlete of the Year in Connecticut, which he was awarded back in March. Clingan and the Bristol Central boys basketball team were unable to finish their season due to the covid-19 outbreak, but Clingan still finished a monster year that saw the 7-foot sophomore average 24.5 points and 16.7 rebounds per game in the 2019-20 campaign, and figures to once again be among the best players in the state this coming season.

One year after fellow teammate Janessa Gonzalez scored her 1,000th point, St. Paul girls basketball senior Jade Udoh followed suit and picked up her 1,000th career tally on Jan. 31, becoming just the fourth player in program history to do so.

Udoh had no idea she was approaching that milestone, and didnâ€™t find out until after point number 1,000 was recorded in a game against Seymour. Quite the surprise for Udoh!

One of the most recognizable football coaches in the state, St. Paul head coach Jude Kelly announced his retirement back in February, bringing to an end a coaching career that spanned 46 years.

Kelly, 67 at the time of his retirement, took over at the helm of the Falcons back in 2005, when the program was in a co-op with Goodwin Tech. He said goodbye with a career record of 70-84 with St. Paul, including a state semifinal berth in 2009.