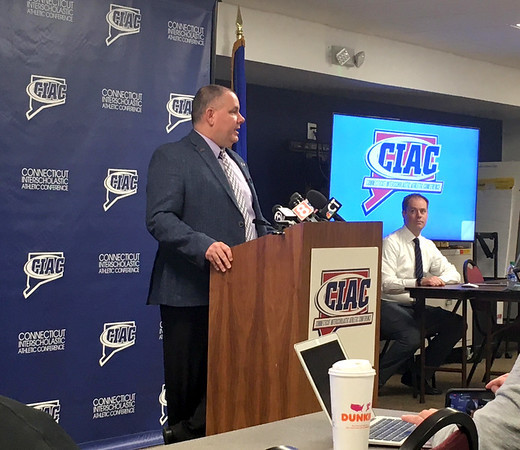 CHESHIRE - The Connecticut Interscholastic Athletic Conference's Board of Control met on Thursday morning to discuss the sports calendar for the rest of the academic year, and announced that the plan moving forward still includes winter, spring, and an alternate semester season for fall sports that were canceled in 2020.

"The discussion centered around a plan including winter, alternative and spring seasons," the CIAC said in a statement. "Given the fact that both the regular season and state tournaments for spring sports could not be held in the 2019-20 school year, the board continues to prioritize conducting a spring season with the fewest possible variances in length and tournament experience."

Spring remains the priority for as full a season as possible, but after Thursday's meeting, the hope is still to have all sports played in 2021, including football, which was canceled this past fall after the Department of Public Health did not find full-contact football to be safe during the covid-19 metrics at the time. The CIAC put together an alternate semester season for any fall sports that missed at least 40 percent of its scheduled games in the fall, which would be played prior to the spring sports season.

The CIAC announced last month that winter sports would be pushed back until Jan. 19, and that scheduling for the season would be discussed in the coming weeks.

"The viability of playing any particular sport safely will continue to be informed by guidance and feedback from the CSMS Sports Medicine Committee, the Connecticut Department of Public Health, Governor Lamont’s office, and CIAC member schools," the CIAC said in Thursday's release.