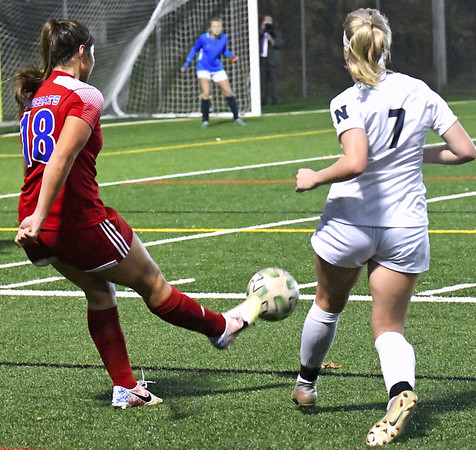 BERLIN - The Berlin girls soccer team had hoped to be preparing for a deep state tournament run at this point in the season, but given the circumstances, the Redcoats made the most of their season finale on Thursday evening.

Berlin said goodbye to its group of seniors with a 5-1 win over Maloney to claim the consolation game in the CCC’s Region D Tournament, closing the book on what was an 8-3-3 season for the Redcoats.

“After what the seniors had to go through last year, we wanted to give them the best experience possible this year,” head coach Alex Joslyn said. “All eight of them will be tough to replace and missed dearly”

Among those eight seniors was Ashley Wenzel, who picked up a pair of goals and an assist in the win. Jenna Zup finished with an identical stat line, and Jenna Wenzel had a goal of her own to go along with her two assists.

Farmington 1, Bristol Eastern 0: The Lancers closed their season with a hard-fought game that was scoreless heading into the second half, but Farmington wore Eastern’s defense down.

After peppering Lancers goalkeeper Grace D’Amato early in the second half, while banging a couple of shots off the crossbar, Farmington broke through in the 49th minute when Alyssa Huntley put home the first goal of the game, which proved to be the only one.

Farmington sent 23 shots towards D’Amato in net, who finished the season strong with 17 total saves. The Lancers couldn’t find the equalizer in the second half, but sent their seniors off on a strong effort against a 10-win team.

“It was the last contest for seniors Kate Kozikowski, Lili Morneault and Annabella Lusitani,” head coach Scott Redman said. “The three seniors have left the program in a better place than when they came and we can't ask for anything more than that. I am extremely happy that they were able to play this season as I witnessed the heartache of not being able to in spring. These young ladies took advantage of every day they had together and relished the opportunity to compete."

Bristol Central 3, Plainville 1: The Rams ended their season in comeback fashion on Thursday, erasing a 1-0 deficit with three straight goals to take down the Blue Devils.

Bella Bosco scored the game-tying goal for Central in the second half, and Rachel Wygant put home the eventual game-winner, making sure the program’s five seniors Christine Attle, Bosco, Lily Hansen, Jenna Lowe, and Emma Quintero went off on a winning note.

“[We] will forever be grateful for what these five amazing young women did for this program,” head coach Ginny Godbout said.

Sure, this season looked much different than its predecessor, but it still ended with Goodwin Tech celebrating a win over Prince Tech after the final volley of a conference tournament. The Gladiators, having won the 2019 CTC Tournament, moved over to the CRAL this year due to regionalized scheduling, and took down Prince Tech 3-1 (25-19, 25-21, 25-27, 25-17) to complete another memorable year for the program.

Nathlatie Delarosa had 10 service points for Goodwin Tech, while fellow senior Tabetha Trammell had 20 to go along with her 10 assists. Both were named to the CRAL’s All-League team. Javiellie Gonzalez concluded her freshman year with 16 service points, while sophomore Trinity Chambers dished out 17 assists.

Southington, 7-7 on the year, got four kills and 16 digs from Kaley Smith, 10 kills and three aces from Kaylie Garcia and 16 assists from Victoria Zajda. Rachel Possidento added eight kills and six digs, while Emma Pfanzelt had 15 digs.