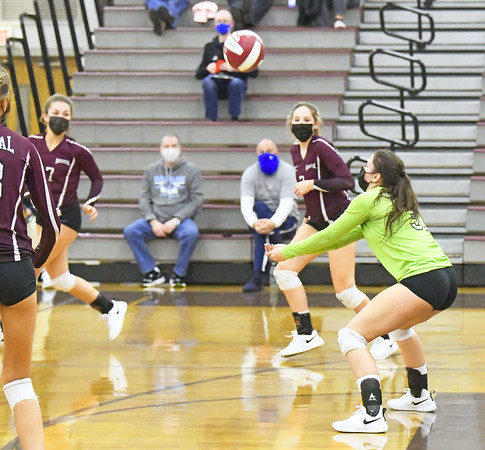 The Rams shut out the Hurricanes for the second time this season to improve their record to 9-2 while New Britain falls to 2-9 each with one game left in their regular seasons. Bristol Central won by set scores of 25-9, 25-14 and 25-18.

“I’ve got young girls out there so it’s communication and them getting to know who’s in what positions on the court,” New Britain head coach Michelle Abraham said. “I’m not disappointed whatsoever. I have a lot of 10th graders that play during the night, in two years they’re gonna jell and it will be a completely different story here.”

The second set started far more competitive than the first as the Hurricanes pushed the Rams much harder to build a lead. The set remained within three points until Central took a 17-14 lead and did not look back until the set was over. The nine-point run was highlighted by a heavy-handed spike from Emily Ericson and then capped off with a service ace from Kayla St. Onge.

“I’ve noticed that whenever we play on a Monday, we have to pick up the energy from the start,” Central head coach Lance Pepper said. “We have to find a way to really dig in and anticipate every game is going to be a battle. New Britain did a great job of making us earn our points.”

The Hurricanes were able to capitalize on the Rams’ struggles and keep the set in reach by putting forth its best effort of the match.

“We started off a little sloppy, a little sluggish, we weren’t moving our feet defensively,” Pepper said. “We weren’t making them earn their points. We have to keep the ball in play, that’s what it comes down to.”

Central closed the match out with a much stronger set than the one before and led by as much as 15-9 early on. The Hurricanes made small runs in between, but were unable to come within more than three points.

“I think they picked up the intensity a little bit,” Pepper said. “New Britain was very scrappy tonight. Their libero did a very good job of keeping the ball in play. I think we had to continue to put pressure on them with our serving.”

The Rams started the match with a dominant first set as well, holding New Britain to under 10 points. Central came out with plenty of energy to establish it was the better team before coming out flat to start the second set. Ericson posted six of her game-high 16 kills while Jadyn Bauer converted three of her first four kill attempts.

The Rams will play their final match of the regular season Thursday on the road against Lewis Mills while the Hurricanes will return to Bristol to take on Bristol Eastern the same day.