'They're definitely looking forward to it': Bristol Central girls volleyball excited to be back in the gym, motivated for upcoming season 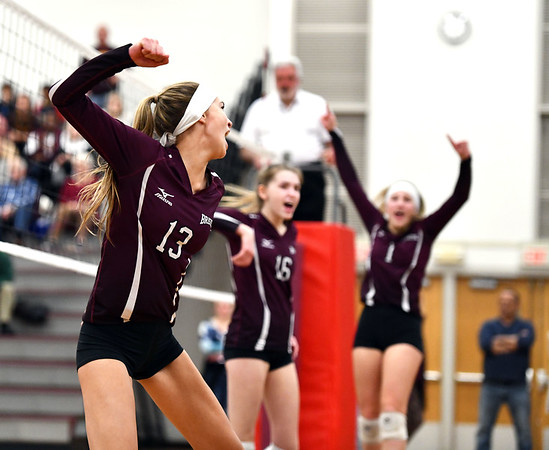 BRISTOL - For the first time since December of last year, the Bristol Central girls volleyball team took the court for a full team practice on Monday afternoon.

Monday marked the first date for fall sports teams to begin full practices after being in small cohorts throughout the summer and limited to conditioning activities. But now, the Rams and all other teams are able to spend 90 minutes per practice on skill work, and Bristol Central is excited to begin a season that appeared to be in jeopardy just a couple short weeks ago.

“They're definitely looking forward to it,” Rams head coach Lance Pepper said. “They're thrilled to get things going and get ready for our season opener are on Oct. 1.”

Not long ago, the girls volleyball season, in its normal structure was considered unsafe for the current covid-19 climate by the Department of Public Health, which recommended that the Connecticut Interscholastic Athletic Conference either seek to move the season outdoors or push it back to the spring. A lack of resources and available venues made moving the season outside impossible, but the implementation of masks cleared the season to begin on Oct. 1, and Bristol Central will open its season that day at home against Avon.

For Pepper and the team, the season’s survival was a massive relief, especially with high school sports having been shut down since March 9, but Pepper is reminding his team that given how quickly things have changed through the summer and into fall, each practice and potential game should be cherished.

“Something could happen tomorrow and that's the end of our season,” Pepper said. “I've reiterated this multiple times at our practices that this could be the last time you step onto this gym. So, how do you want to leave? Knowing you put 100% into a practice or a match and being successful during that session, or do you want to have an off day and the season suddenly gets canceled? As a player, how do you want to be remembered?”

Pepper’s motivation comes with a realization that this preseason will have to be treated differently from all of the others. With conditioning workouts beginning over the summer, then paused and restarted again while the CIAC figured out when the season would begin, conditioning hasn’t been as regular as normal, and with players now required to wear masks, Pepper and his coaching staff are adjusting to how quickly their players can prepare for a season that begins in 10 short days.

“That first practice, it definitely took some getting used to as far as figuring out how much we could push them in the gym,” Pepper said. “But they have been getting used to it. You can definitely tell their comfort level [with the masks] has gone up since we started practicing with them, but it's also a different story going from regular passing drills to going all-out and getting us up to game speed. Conditioning was on and off all throughout the summer, so going in, you could tell some of the kids weren't as conditioned as in previous years, so now going into it with the masks, it's definitely taking the kids some time getting used to it and getting acclimated.

“That is something that's across the board, so all of us schools are in the same boat. But whatever we have to do to have a successful season, we're willing to do it.”

For the Rams, there will be little time to ease into the new season, especially given the scheduling tweaks that were implemented in order to regionalize competition and limit travel. Now, Bristol Central will be pitted against a number of the Central Connecticut Conference’s top teams, starting with Avon on opening night. The Rams still have their usual two dates with Bristol Eastern, and now add two matchups each with quality teams like Southington, and Bristol Central will have plenty of opportunities to get used to quality opponents before the postseason that still carries an unknown in terms of what that format will look like.

“The way the schedule was set up based off our location, we drew some really good competition,” Pepper said. “There's really no off days. Whether we play Avon or Bristol Eastern or Southington, those are all tournament teams. In order for us to continue to grow as a team and program, those are teams you want to be playing day in and day out. I'm very pleased with who we have [on the schedule] this year.”

Before even thinking about a potential postseason, Pepper and the Rams have a tough first opponent to prepare for, and even more unknown foe in the coronavirus, which could impact the season at any time. For now, the team is back on the floor and getting set for Oct. 1.

“At this time we're just starting to get our kids back to 'normal' as far as drills we can run to get them up to game speed as soon as possible,” Pepper said.