'Let us play': High school football players, coaches rally at Capitol to demand their seasons back

Joe Aresimowicz, state Speaker of the House and Berlin football coach, speaks at the protest in Hartford. | Matt Hornick | Staff Buy this photo 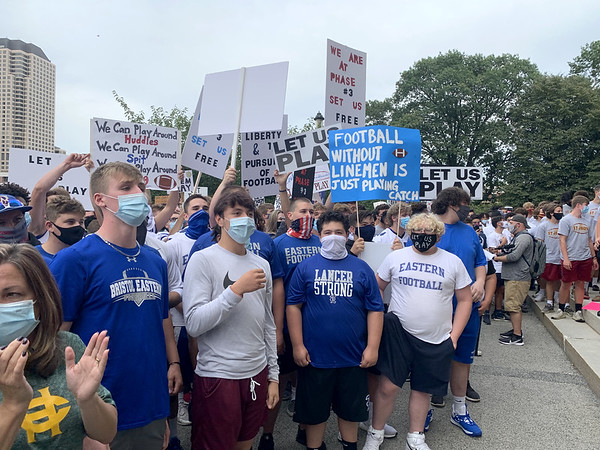 Bristol Eastern football players at the protesting at the capitol building in Hartford. | Matt Hornick | Staff Buy this photo

HARTFORD — Following Connecticut’s decision to cancel full-contact 11-on-11 football despite bringing back all other fall sports, more than 1,200 high school students, coaches, parents and public officials gathered at the state Capitol on Wednesday in Hartford to demand Gov. Ned Lamont and the Department of Public Health reevaluate the move.

With jerseys of every color spread across the crowd and signs filling the air with messages to bring the season back, the desire to reverse the government’s decision was clear.

Organized by Haddam-Killingworth student-athletes Daniel LaRosa, Kevin Cavrell and Brian McNamara, and Trey Garea of East Haven, approximately two dozen people — including Berlin head coach and state Speaker of the House Joe Aresimowicz — addressed the massive crowd that overtook the lawn behind the Capitol all with one message: “Let us play.”

“We have to raise our voice for change,” Bristol Eastern senior Logan Schenk said. “Obviously, we all feel that we should have our season. We’ve been looking at the statistics and feel it’s safe to play and we’ll risk anything. We feel that we should be heard and hopefully our lawmakers and the department of health hears us and there will be change.”

Shortly after the protest, Lamont tweeted, “I'm calling for a meeting between [the Department of Public Health] and [the CIAC] to be held on Friday regarding ways to safely hold school sports. We have an obligation to all of our students, faculty, staff, and administrators to keep them safe, and I expect that goal to be the focus of the discussion.”

The protest signed up far more speakers than it was able to use, but messages were consistent. Players and supporting adults believe the state's rate of coronavirus infection is low enough to conduct football safely and they don’t understand what influenced the controlling powers to cancel the season when so many other states are playing football now or moved it to the spring.

Plainville senior Ryan Barker was slated to speak, but did have the opportunity along with many other potential speakers, but wanted to share a message of resilience as they continue to fight.

“All the Plainville kids down there, those are all the people I play for Friday night,” Barker said. “We’ve been working year round to get this opportunity, that’s why I want it so badly.”

The multitude of speakers addressed a variety of reasons why football is important such as brotherhood, structure, bringing back normalcy, instilling values of hard work and leadership and detriment the loss of football can have on the mental health of students. New Britain football players Jaden Felix and Emanuelle Madera planned to speak about the importance of how football keeps them on a straight path.

“Being from the inner-city it’s really easy to get into the streets and get into trouble,” Madera said. “I feel like football helps me and my brothers stay out of trouble and keep us on a straight path and make us want to go to school and make us want to bring it to the next level and go to college. It motivates us. It puts that fire in us. Football is more than just a sport to some of us.”

After many speakers, the protestors gathered to march a lap around the building before dispersing. They chanted “let us play” repeatedly as they hoard lined up to walk.

“We will not go down without a fight, we will play football this fall,” Aresimowicz said. “To let that happen, we have to continue to do the right thing. Let people know the stories of why we deserve to play, let them know that we’re not going to go away until they let us play. Let’s get the games started on Oct. 1.”

LaRosa, Cavrell and McNamara started a petition on change.org immediately after the state’s decision was announced and it now has more than 33,000 signatures. So while the future remains unclear for these hopeful football players, they will not go down quietly.

“This fight is not over, you have great legislators here who are fighting hard for you, who are going to work hard for you,” state Senate Minority Leader Len Fasano said. “There are some meetings coming up this week. We are going to do our darndest to get this done.”