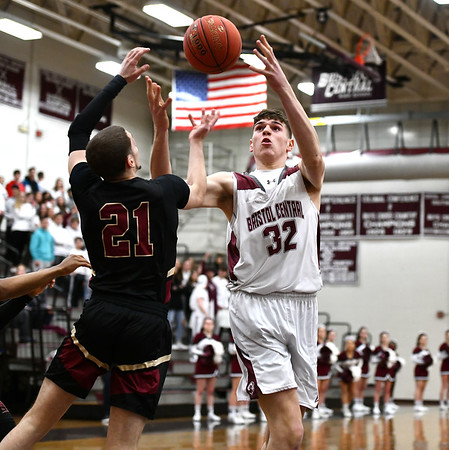 BRISTOL – The local basketball courts have been relatively quiet as the coronavirus outbreak continues to put the sporting world on a collective hold, but Bristol Central boys basketball star Donovan Clingan’s cellphone is still seeing plenty of action.

Clingan received phone calls from 11 different college coaches on Monday, speaking to Notre Dame, Virginia Tech, Iona, Louisville, Georgetown, Providence, Iowa, UCF, Rutgers, UConn, Syracuse, Northwestern, Michigan State and Yale. Clingan has already received offers from some of those schools on that extensive list, and more offers came in with those phone calls, as the dynamic center received scholarship offers from Notre Dame, Michigan State, Rutgers and Yale over the past 48 hours.

One of those offers, from the Scarlet Knights, offered Clingan a chance to connect through native cities, as Rutgers head coach Steve Pikiell is also a Bristol native and a St. Paul graduate who led the Scarlet Knights through a resurgent season that almost certainly would have led to the program’s first NCAA Tournament appearance in nearly three decades had March Madness not been called off due to COVID-19.

“We talked a lot about Bristol sports, even from when he played,” Clingan said of his conversation with Pikiell. “He was wondering why we don't play St. Paul anymore, and that they all used to play against each other. [Pikiell] liked how I’m a big man that can do multiple things and not just play in the post. He liked how I can shoot and dribble and play defense.”

Notre Dame head coach Mike Brey had a similar assessment of Clingan, and offered the Rams junior a chance to become one of the tallest players the Fighting Irish have had in recent years.

“Most colleges like how I move and can shoot and do multiple things,” Clingan said. “[Brey] came out to my first scrimmage of the year to watch me, and I had a tough day, but he continued to watch a lot of my film over time, and he was really interested in me and offered me a scholarship.”

Offers from schools like Notre Dame and Syracuse would give Clingan a chance to play his collegiate seasons in the ACC, arguably the top conference in the country with schools like Duke and North Carolina, which would offer Clingan an opportunity to play against the best talent in the nation.

Clingan is getting attention from a number of the premier schools in the country, and Monday’s call log showed just how coveted the 7-footer will be when it comes time to make his commitment. But for Clingan, there is still plenty of work to do, and he’s spending his summer looking for ways to improve upon his All-State season.

“My footwork could use some improvement so I can play better defense against some guys and avoid travels, and I really want to get stronger,” Clingan said. “I've been working out every day, that's what I gotta do to be great. I've been practicing with my AAU team and just do whatever I can, but it's restricted right now.”

Clingan’s phone was ringing off the hook on Monday, but he’s hoping for even more calls in the coming months. His talent and imposing size has led to attention from a number of top schools, but Clingan is hoping his 11 incoming calls from college coaches isn’t his high point.