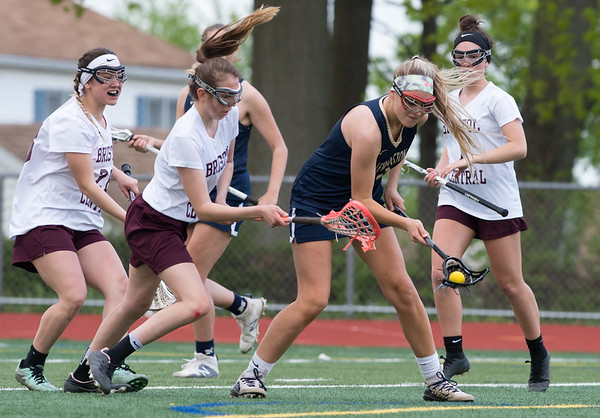 BRISTOL - The Bristol Central girls lacrosse teamâ€™s only goal for the 2020 season was to qualify for the state tournament.Â

In only their second year since disbanding their co-op with Bristol Eastern, the Rams were looking to build on a 4-12 record in their inaugural season and punch a ticket to the postseason.

While that is the same goal as every other team in the state, this would be the first time any of the girls on the team play in the tournament. That is very important to a group that has suffered through difficult seasons in the past.

â€ś[Making the tournament] would be extremely important,â€ť senior captain Ashleigh Norton said. â€śEspecially because itâ€™s my last year playing and because weâ€™ve never done anything like that before. Weâ€™ve only won four or five games in a season. Just to have that to end off my last year would be really great, especially with the other seniors.â€ť

This year, the girls did far more than simply talk about their goal, they put in the work to make it happen. Many members of the team have been training since November and joined a winter league to get in more practice and the team thinks it is working.

â€śGame sense in lacrosse is a big thing,â€ť head coach Kyle Phelan said. â€śThe stick skills are obviously really, really important, but [they are] understanding the flow of the game better and playing more as a team. In the past, weâ€™ve always had one or two dominant scorers, but the ball is being shared more now than Iâ€™ve ever seen, which is good.â€ť

Playing in the offseason didnâ€™t just help these players improve their skills with extra repetitions, it gave them extra opportunities to work on their skills against better competition.

â€śWeâ€™ve played against some Massachusetts teams and some teams in South Windsor and a lot of those girls come froms schools like East Catholic and Windsor,â€ť junior captain Sadye Kowalczyk said. â€śTheyâ€™ve been playing lacrosse since they were in kindergarten and lacrosse is a very new sport to Bristol. It puts us against some tough competition, but this year, weâ€™ve actually improved so much and we won a lot of our winter league games. It just really helps us to try and get control of the ball, pass it around before we score and it helps us work on our technique.â€ť

Participating in this winter league displays how determined this team is to get better. The games were played in East Windsor, approximately an hour away, and sometimes as early as 7 a.m., but they say it was worth it.

â€śIt just shows how committed some of these kids are to getting better and improving,â€ť Phelan said. â€śTheyâ€™re putting effort and we play against some pretty good teams in that winter league and weâ€™re competing hard. Itâ€™s good for what weâ€™re doing. I think it is extremely realistic for us to have that goal. It would be awesome for the seniors because theyâ€™ve been through [three] years of tough competition and losing seasons. I really think thereâ€™s a good shot and I think it would be awesome for the kids whoâ€™ve been around the program to experience that.â€ť

Unfortunately, all of this work might never be able to be put on display as spring sports are indefinitely suspended due to the spread of the COVID-19 virus. For a group of players who were ready to prove themselves and make history for their young program, they just want a chance to play.

â€śI was feeling really good [about the season],â€ť Norton said. â€śEveryone was talking to each other, everyone has been working super hard and playing together. We were all so excited because [Saturday] would have been our first practice and we were all looking forward to it.â€ť