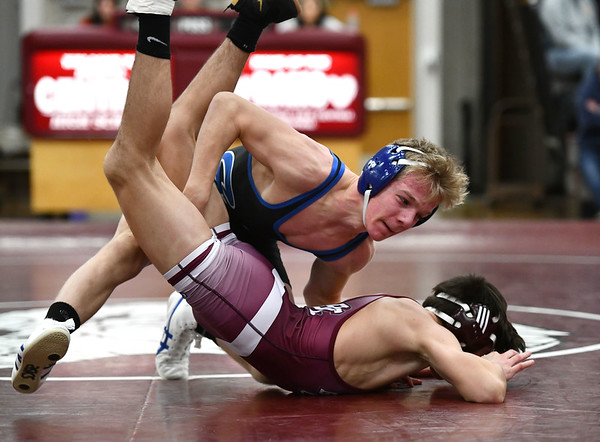 BRISTOL - The No. 5 Bristol Eastern wrestling team didnâ€™t need long to secure its 10th consecutive win over No. 7 Bristol Central on Wednesday, as they won 11 of 14 matches for a 49-15 victory.

Easternâ€™s Trent Thompson (113) only needed 13 seconds to earn his 100th career varsity win. He quickly snagged two points before Colton Pelletier suffered a shoulder injury and was unable to continue, which gave the Lancers an early 6-0 lead.

Mason Lishness (120) and Jake Aldi of Central grappled in a tightly contested match that required all three periods to finish. After neither was able to score in the first period, Lishness struck first to take a 1-0 and was able to keep Aldi at bay to win 3-0.

Scoring came easy for Easternâ€™s Aaron Morocho (126) as he picked up a technical fall over Jake Leone. Morocho posted four points in each of the first two periods before rifling off 10 in the final two minutes to win the match 18-2.

The Rams scored their first team points of the day when Centralâ€™s Jason Feto (138) batted to an 8-6 win over Josiah White. Feto, a senior captain, took a 4-2 lead into the third period before letting White tie the score 6-6. Feto landed one more takedown that gave him the two points necessary to win.

Cameron Cruz (138) did not let Central gain any momentum and added a major decision to Easternâ€™s team score. Leading 8-3 after two periods, Cruz scored six points in the third for a 13-4 win over Christopher Osuch.

Tommy Nichols (145) nearly pinned Matt Duquette at the end of the second quarter, but had to settle for a major decision. Nichols turned a 7-4 first-period lead into a 12-4 lead after the second. He was nearly able to score the points for a technical fall, Duquette was able to outlast the final scoring attempts to keep the score at 18-5.

Alex Marshall (152) landed the first pin of the contest and needed a lot of time to do so. Maintaining a nine point lead late in the third period, Marshall was able to get Umar Malick in pin position at the matchâ€™s 5:38 mark.

Morelli led 2-1 after the first period, 4-3 after the second and was able to fend off any late scoring attempts from Beaucar to secure the win.

Matthew Beaucar (170) trailed Dylan Piazza by only two points, but then allowed six in the final period to lose 10-3.

The match began to speed up at the end as the Lancers won consecutive matches with first-round pins. Tyler Gleifer (182) bested Jacob Boucher in just 40 seconds and Logan Meyer (195) followed it with a 43 second pin of Jeffrey Labbe. Centralâ€™s Jakob Salinas gave his team six points with a win by forfeit.

Next up for teams will be the CCC tournament Saturday.