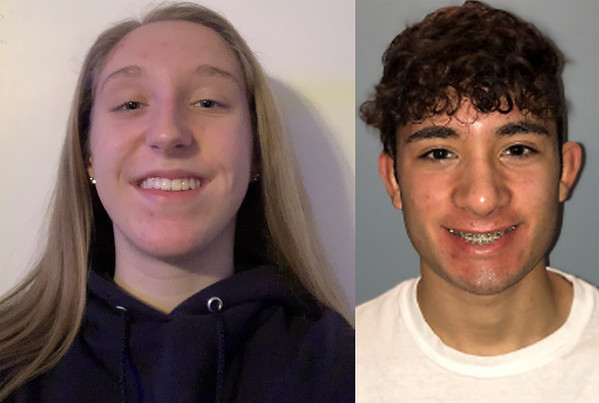 Two high school seniors who have already received multiple Athlete of the Week nods prior to now have been chosen once more. They are Jordan Ouellette of the Bristol Eastern girls basketball team and indoor track runner Jose Ramirez of Bristol Central.

Ouellette is a four-year starter for coach Tony Floyd as a forward/guard and this is the third time  she has earned the AOW recognition, while also earning multiple All-Press and all-conference honors. She’s a team co-captain and the daughter of David and Deena Ouellette. She and her teammates carried a win-loss mark of 5-4 coming into this week before facing struggling Maloney last night.

“We’re pretty good, but consistency can be an issue,” Ouellette said. “But we’re looking to keep pushing and win more games. We want to make it far into the (state) tournament and, obviously, the championship is our goal.”

Asked about her job on the team, it was “pretty much” anything she can do to help get wins.

“It’s being a leader and scoring,” Ouellette said. “Being a good teammate for everyone and it’s pretty much running the team play, getting everyone moving and things like that.”

Ouellette began playing basketball when she was in the first grade through the Bristol Boys & Girls Club. She played with the Bristol travel team and the CT Magic.

She smiled when asked if she is a better player than her mother was. Deena (Kuharski) Ouellette played for Bristol Eastern during the Laura Lishness era, which won state titles in 1984 and 1987.

Ouellette added that basketball is her lone sport and she enjoys it for different reasons.

“The fact that it’s a team sport,” Ouellette said. “It’s a sport where everyone can contribute. I like the competitiveness of it, how it’s fast-paced.”

And, what advice would she give to a younger player?

“Just keep practicing and play a lot,” Ouellette said. “You just get better when you play a lot. Having coach Floyd, we learn something new every day. He always has something new.”

Besides basketball next year in college, Ouellette plans to study math-related subjects.

Ramirez, the son of  Efrian and Marcia Ramirez, is considered one of the city’s finest athletes at his craft. He runs cross country and competes in both indoor and outdoor track and is the 2019 indoor state champion and school record-holder in the 600 meters, as well as having other top finishes during his four-year running career.

This past week, for example, it was announced that the Bristol Central 4x800 relay team had recorded the fourth best high school time in the country in that event when he combined with Nate DeAngelo, Austin Freve and Mark Petrosky at the Yale Interscholastic Track Classic on Friday. Their time, 8:08.62, is currently 11th best in the nation after several other teams bettered it this past weekend.

“You have to hit 8:08 for emerging elite and 8:02 is what we want to qualify for the championship,” Ramirez said. “Our goal is to go as far as we can below eight minutes.”

When it was discovered that the relay had ranked fourth in the nation, Bristol Central coach Kevin Taylor saw where their hard work had paid off.

“We knew what they had coming into the year,” Taylor said. “Those guys were coming off of strong cross country seasons. They know they are this good, it’s just about putting it together consistently.”

Ramirez was also a standout in the 600 meters at the Yale indoor meet, placing third overall in posting a time of 1:24.42, against schools from various New England states. He holds the school mark of 1:23.00, which he plans to lower. He added that the Yale meet was an eye-opener for him to start lowering his times.

“It was my fastest time of the season,” Ramirez said. “I ran very well considering I was in one of the lower brackets. I definitely plan to do better time-wise this season.”

He still has the conference, Class L and, hopefully, the State Open left this season. There’s also the possibility of the New Englands and for the relay team at the nationals.

“Our (relay team) goal is to take that (success) into spring season,” Ramirez said. “That’s bringing the same guys and the same energy.”

He says the relay team goal, and his individual goals for the 600-meters this winter and 800-meters this spring are the same: to produce first place finishes at both the Class L’s and State Open.

As far as next year goes, it’ll be in college running track and concentrating on kinesiology in the classroom.