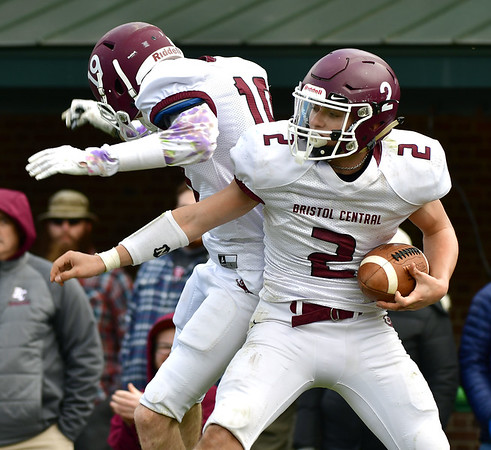 BRISTOL - When Bristol Central took possession trailing by six points in overtime in the 61st Battle for The Bell Thursday afternoon, there were very few in the crowd of several thousand at Muzzy Field who had any doubt who would get the ball.

Sophomore quarterback Victor Rosa found an open seam and scampered 10 yards to tie the game, then added the two-point conversion to give the Rams the win, capping one of the most memorable games in the long annals of the Thanksiving Day tradition.

Rosa’s conversion points were his 32nd points of the game in Central’s 34-32 win. He scored a series-tying five touchdowns while rushing for 171 yards on 31 carries and throwing for an additional 33 yards.

“Victor’s just a special talent,” Central coach Jeff Papazian said. “He’s young and there’s still some things he can work on over the next few years. But when everybody in the place knows where the ball’s going to go and you’re still able to produce that’s a big-time talent.”

Rosa finished his sophomore season with 1,146 rushing yards despite missing the better part of two games with an injury. His 20-yard carry early in the third period of Thursday’s game put him over the 1,000 yard rushing mark, and he added to the total with a spectacular second half that also included a potential game-saving interception.

Although he completed only two passes Thursday, he finished the season with 475 yards passing, completing just under 50 percent of his passes. He scored 19 touchdowns and threw for two more.

“We thought we could take some of the pressure off him with Shawn (Rodriguez) and Galen (Hickey),” Papazian said, “but in the end Victor played a huge game. And it was not easy with those big guys Eastern has up front. We have to give some credit to our guys up front, especially late in the game. They opened some huge seams, especially on the two plays in overtime.”

Rodriguez finished the game with 65 yards in seven carries and scored a two-point conversion. His 59-yard run in he second quarter helped set up Central’s first touchdowns and helped pull the Rams out of the doldrums of a frustrating first period.

Central’s defensive player of the game award was presented to Jake Salinas, the anchor of the Rams’ defensive unit. Salinas was the leading tackler in the game, and despite being called for an unusual number of penalties, was a huge factor for the Rams.

“Jake was really keyed in today,” Papazian said. “You could tell right from the start that he was going to have a big game. He made a lot of really big plays. He does a lot of things for us that people don’t always see. When Eastern comes out in different formations like they did today, he was able to recognize that and align our defense on the fly to match what they were doing. Players like that don’t come around very often.”

Papazian acknowledged that with all the penalties - the Rams were whistled 22 times and had three two-point conversions called back because of penalties - the game was not the most flawless the Rams have played.

“Every year when it comes to this game it seems like there’s things that happen,” he said. “No matter what you tell the kids and how well you think you’re prepared there’s always something that doesn’t quite go the way you wanted.”

“It wasn’t the prettiest game,” he added. “We were riding waves of emotion all game long and there were plenty of times we could have folded but we didn’t.”

Thursday’s game was the final one for Central’s three seniors. Galen Hickey had five carries for 19 yards and caught a big pass for 15 yards for a strong finish to his career. Ian Staubley, who missed most of the season with injuries, returned to the lineup Thursday and was instrumental in the Rams’ blocking the two extra points that forced the game into overtime. Senior Colten Pelletier was unable to compete due to injury.

“I’m really proud of the whole team,” Papazian said. “It was a real up and down season with lots of emotional highs and lows. We had some real big wins this year and some tough losses. But as long and as tough as this season was at times, this one today sure makes it all worth it.”