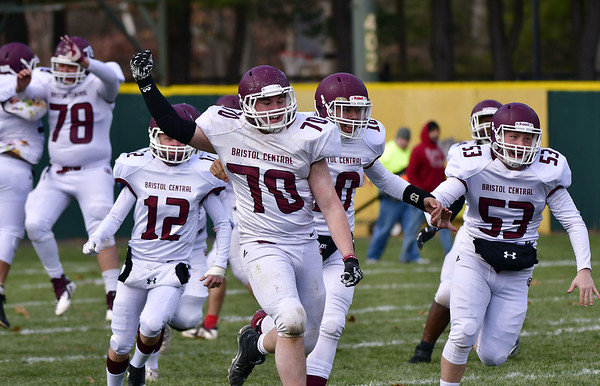 BRISTOL - Victor Rosa scored in overtime and added a two-point conversion run to lift Bristol Central to a thrilling 34-32 victory over Bristol Eastern in the 61st renewal of the Battle for the Bell Thursday at Muzzy Field. It was the first overtime game in the history of the series.

Rosa’s game-winner came after the Lancers had rallied with a furious drive in the closing minute to tie the game and gave the Rams their fifth straight win in the rivalry.

It was an exciting back and forth game that featured outstanding running backs on both sides and plenty of late game heroics that kept the game in doubt until the final play.

The Rams appeared to have taken control of the contest when Rosa scored with 1:00 showing on the clock to put Central up 26-20. But the Lancers had other ideas. Aided by two penalties, Eastern marched 67 yards in eight plays to tie the game with six seconds showing on the clock. Bryce Curtin had three big pass completions, including a 12-yarder to Treyvon Daniel that brought the Lancers to the two yard line and set up the touchdown run by Alex Marshall. Ian Staubley blocked the extra point attempt, his second block of the game, to force the contest into overtime.

“We had a minute to go, we had three timeouts, we were going into the wind, I didn’t really know what we were going to do,” Eastern coach Anthony Julius said. “We always tell our kids we try to stay calm, stay composed and Bryce made a lot of big plays [and] we were aided by a penalty. It was great execution by our guys, good job by our guys up top making sure we were communicating and talking the whole time.”

The Lancers had the first possession in overtime and scored on a fourth-down four-yard touchdown pass from Bryce Curtin to Edgar Santiago, but the pass for the two-point conversion was incomplete, setting the stage for Rosa and the Rams.

Rosa scampered 10 yards on Central’s first play from scrimmage to tie the game, then bulled his way up the middle for the conversion to give Central the win.

It was a big day for a pair of sophomore runners as both Rosa and Marshall etched their names into the Thanksgiving Day game record book. Rosa had 31 carries for 171 yards and five touchdowns to earn the Offensive Player of the Game award for Central. Marshall carried 37 times for 159 yards and scored three times for the Lancers. He was Eastern’s Offensive Player of the Game.

The Rams were hit with 22 penalties for 163 yards. The 22 penalties set a Battle for the Bell record. But they were able to overcome the setbacks with big plays when they needed them.

“I don’t know how you win a game with 22 penalties,” Central coach Jeff Papazian said, “but we found a way somehow. Our guys didn’t quit. It wasn’t the prettiest game. We were riding a wave of emotion and there were plenty of times we could have folded but we didn’t.”

The Lancers took control of the game early, driving deep into Central territory twice in the early going, but were not able to punch it in. Central stopped the Lancers on downs at the 9-yard line and later forced a fumble at the 13 as the teams battled through a scoreless first period.

The Rams finally got a break when Shawn Rodriguez found an opening and raced 59 yards before being dragged down by Daniel at the Lancers’ 8-yard line. It took Rosa three runs from there to get Central on the board.

“That run by Rodriguez was really big,” Papazian said. “It kind of settled us in and righted the ship at that point.”

Eastern countered the score with a long drive of their own, virtually all of it on runs by Marshall.

Marshall scored from four yards out and Jack Bachand kicked the extra point to give the Lancers a 7-6 lead they would take into halftime.

Central got on the board quickly to start the third period. After a penalty knocked them back to the Lancers’ 35, Rosa hit Tre Jones with an 18-pass to dig his team out of the hole and then led the march the rest of the way to put Central on top 12-7.

But the Lancers answered quickly. With Marshall carrying on all but one play of the eight play march, the Lancers regained the lead. Marshall had a big gain of 22 yards to set up the score and took it in from the one. Bachand’s kick made it 14-12 with four minutes left in the third period.

Rosa led the Rams to another score, tallying on fourth and goal from the one on the second play of the final period. Rodriguez added the conversion points and Central led 20-14.

The Lancers again came right back, this time on a 20-yard pass from Curtin to Logan Schenck to tie the game. Bachand’s kick was blocked by Staubley and the teams remained tied.

Eastern forced a punt, the only one of the half, but Rosa intercepted Curtin’s pass to give the ball back to the Rams with just over two minutes to go. Central made the most of the turnover as Rosa carried on all four plays of the drive and put his team up 26-20 with 1:00 minute left to set the stage for the final heroics.

“I’m super proud of the guys.,” Julius said. “They fought their tails off the entire game and they did exactly what we thought we were going to do, we just unfortunately came up a hair short. You have to give credit to Central, they got the ball and made the two plays they needed to in overtime. When you get to that point all you want is a chance [and] we gave ourselves a chance, unfortunately we came up short and this one hurts really bad.”

Rosa and Marshall were the offensive players of the game. Jacob Salinas was named defensive player of the game for the Rams and Bobby Mosback earned the defensive honors for the Lancers. Both were involved in numerous tackles throughout the game.

Curtin had a solid passing game for the Lancers. He connected on 8 of 11 passes for 71 yards and two touchdowns. Schenck caught five passes for 46 yards to lead the Lancers. Rosa completed only two of four passes, but both came in crucial situations to dig the team out of deep holes.

Central finished the season with a record of 5-5, their sixth straight year of .500 or better. Eastern ended at 2-8. The Rams won their fifth straight Battle for the Bell and now lead the series 36-23-2.