Analysis: Bristol Central must use final two games of season as positive building blocks for next year 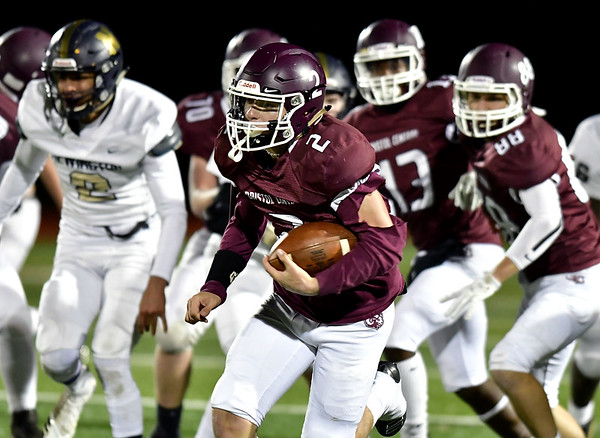 BRISTOL - With any chances of sharing in a conference title gone with Fridayâ€™s loss to Newington, the Bristol Central football team now must turn toward a strong finish to what has been an up-and-down year so that the young Rams can move forward to next season on a positive note.

With only one healthy senior left in the regular starting lineup, the final two games must serve as a positive learning curve for a talented group of underclassmen.

â€śWe have to get in gear for those last two games,â€ť head coach Jeff Papazian said after Fridayâ€™s tough 21-16 loss at home. â€śWe have to take look to figure out what went wrong and use it to build on.â€ť

Barring any unforeseen changes, the Rams will return virtually their entire line up for next season, and closing out this year on a winning note will be a big plus in the offseason. Central is 4-4 after Friday nightâ€™s loss and needs to pick it up, especially on the offensive side, if they hope to end the year with a winning record.

The Rams again played tough defense for much of the game against Newington, but a lack of consistent offense, especially in the second half, allowed the Indians to wear down the defensive unit.

â€śUnfortunately the offense kind of got bottled up in the second half,â€ť Papazian said. â€śIn a game like that, if we had been able to pick up a first down or two it would have changed the momentum and allowed us to keep the defense off the field for a little longer. We left the defense out there a little too long and they were able to take advantage.â€ť

Fridayâ€™s game was a battle from the start with both teams trying to capitalize on what they do best.

Central got its starting quarterback back after a two-game absence and took advantage by showcasing the sophomore speedster. Victor Rosa ran for a 63-yard touchdown on the Ramsâ€™ first possession and finished the night with 168 yards on 18 carries.

Newington countered with the combination of running back John Amaning, who had 140 yards rushing, and quarterback Nick Pestrichello, who hit on 9-of-14 passes for 115 yards and three touchdowns. All three scores came on the same corner pattern from less than 20 yards out.

The Indians had been averaging well over 30 points a game coming into Fridayâ€™s contest and the Rams adopted a bend-but-donâ€™t-break attitude that kept them well below that average. Central forced a fumble at the 1-yard line to stop one Newington drive and was able to slow the running game enough to force the Indians to punt the ball away.

But in the end, the Rams couldnâ€™t stop the short passes to the corner from inside the redzone and that proved to be the difference.

â€śIt was two pretty good teams going at it pretty hard all night long,â€ť Papazian said. â€śThey made a couple of big plays at the end and we didnâ€™t.â€ť

Offensively, Central struggled to find a balance behind the running of Rosa. Tre Jones came up with a couple of big runs, including 37 yarder to set up the final score, but for much of the game the Indians were able to contain everyone but Rosa.

The Rams were not able to get any kind of aerial attack going in the game until the final plays when Rosa hit two straight passes to Shawn Rodriguez for the final touchdown. Rosa completed just 3 of his 11 passes for 33 yards. Central will need to find better balance in the attack going forward as it prepares to face a couple of pretty good defensive units over the next few weeks in Conard and Bristol Eastern.

Trailing by five after that last score with three minutes to play, the Rams tried desperately to get one more chance with the ball. An attempted onside kick failed to go the necessary 10 yards, but the defense came up with three stops to set up a chance to get the ball back with two minutes to go. On fourth down, Pestrichello made a big push to get a first down by inches and Newington was able to run out the clock.

The Rams wrap up the season with an interdivisional crossover against Conard in the home finale on Friday night before taking on Bristol Eastern at Muzzy Field on Thanksgiving morning.

Conard comes into the game with a record of 5-3 after a big win over South Windsor last week and will be another stiff challenge for the Rams. The Chieftains have won three in a row since being shut out by Simsbury and seem to have gotten their offense in gear after struggling to score in the early part of the season. They will be another big test for the Central defense.