There was plenty of intensity as Bristol Central, Bristol Eastern boys soccer teams faced off 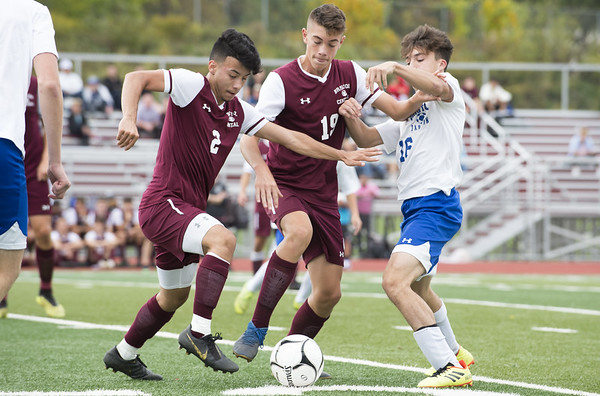 BRISTOL - Heading into Monday’s game, the Bristol Central and Bristol Eastern boys soccer teams were expecting more than the usual gritty matchup between the two rivals.

Recent history showed that both groups were evenly matched on the pitch, but the weeks leading up to Monday’s bout showed that this would likely carry an even greater intensity.

“I was talking to the girls coaches yesterday … and all four teams are on the right side of .500,” Central head coach Nate Jandreau said. “(Eastern) came in without a loss and we only had two losses coming in. I think this is the best records the teams have had going into this. It makes the games matter more, if that’s even possible.”

It’s been said that rivalries are better when both teams are competitive, and after Monday’s match, which ended in a thrilling 1-1 draw, the Eastern/Central rivalry may be peaking.

But it wasn’t just the game itself once it began; the hype leading into the match thanks to the recent success of both teams created an even greater buzz in the crowd, according to Jandreau.

Entering the match, both teams were riding winning streaks that stretched back at least a week. The Lancers, winners of three in a row before Monday, had outscored their last three opponents by a mark of 13-0, and had allowed just two goals the entire season.

Meanwhile, across town, the Rams had rattled off four wins in a row, outscoring their opponents 20-6 over that span, and held a 5-2 record, just one victory away from matching their total last season.

Players on both sides paid attention to the hot streaks of their opponent heading into Monday and anticipated another close Bristol battle. Turns out, they got just what they were expecting.

“It’s great when you’re playing against a bunch of guys you grew up with, and for both teams to come into this game playing as good as they are, you knew it would be a tough battle,” Central sophomore Carson Rivoira said. “That’s exactly what it was.”

Of course, the Rams and Lancers had much more than recent performance as evidence that Monday’s game figured to go down to the wire. The two teams have been consistently caught in memorable dogfights for the past four years, when Jandreau first took over as Central’s head coach.

Since Jandreau arrived, the two teams have played each other seven times, and all but one game has been decided by one goal or fewer. There have been three ties, four games that have gone to overtime, and each team has won at least one game in that span.

The competition has been nearly dead even, which longtime Eastern head coach Bill Sweet acknowledged after Monday’s draw.

“It comes down to the bounce of the ball, and anything can happen,” Sweet, in his 50th season as the Lancers coach, said of the rivalry battles with the Rams. “But the fact that we both have good records and are playing good soccer is fun. Two quality teams.”

Both teams entered the season with state tournament aspirations after both reached the postseason last year.

“It was two great teams going at it,” Rivoira said. “That’s exactly what I would expect to see in a tournament game.”

The Rams, who led at the half on Monday, were hoping to get their first win over the Lancers since 2016, but despite the disappointing finish, feel more prepared for what’s to come in tournament play.

They will have another crack at Eastern on the final day of the regular season, which for these two teams might as well count as a preliminary round of the state tournament.

“You need as many of those as you can get before the playoffs, and I’m sure it will be the same the next time we face them,” Jandreau said.

Ryan Chichester can be reached at (860) 801-5094 or rchichester@bristolpress.com