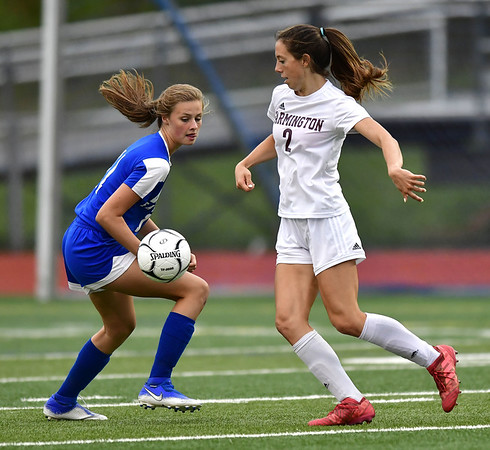 Bristol Eastern's Ciara Collins (11 and Farmington's Katie Powell (2) during girls soccer under the lights on Thursday at Eastern. | Mike Orazzi | Staff Buy this photo
Published on Thursday, 12 September 2019 21:13
Written by

Bristol Easternâ€™s Ciara Collins scored off a free kick in the 78th minute to give the Lancers a 2-2 tie with Farmington in their girls soccer season opener on Thursday.

Bristol Eastern also forced a Farmington own goal in the 74th minute to get within striking distance after Farmington took a 2-0 lead on goals by Ava Ferrari and Sydney Boyd in the first half.

Goalkeeper Maura Cyr kept the Lancers in the game with 12 saves.

Bristol Central 2, Hall 1: The Rams won a hard-fought game at home as Ashlee Crumrine scored off an assist from Sophia Torreso and Hannah Aldieri netted a shot with an assist from Mia Hinton.

The Ramsâ€™ defense, led by co-captains Faith Roy and Lily Hansen, was outstanding, holding off a relentless attack by Hall.

â€śIt was a full team effort and a strong start for BC,â€ť coach Ginny Godbout reported.