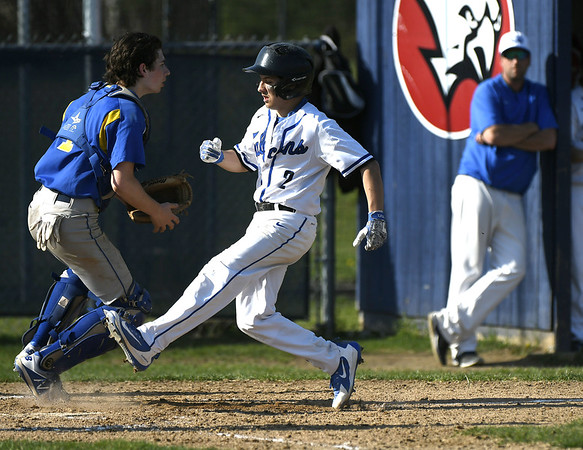 BRISTOL - The St. Paul baseball team picked up a huge win on Saturday, defeating St. Joseph - the No. 2-ranked team in the state according to the latest GameTimeCT/New Haven Register Top 10 Baseball Poll - by a 13-6 score at home.

Starting pitcher Julian Thayer was a star for the Falcons both on the mound and at the plate. He was the winning pitcher, allowing four runs (three earned) over six innings, striking out five. He allowed only one of the first 10 St. Joseph hitters to reach base. At the plate, he hit two home runs for five RBI on the day. Thayer and teammate Ryan Greene combined for six extra base hits and drove in nine of St. Paul’s 13 runs.

Josh Cofrancesco led off the bottom of the first inning with a single and two outs later, Greene followed with his first RBI double of the day.

After St. Joseph starter Trent Price retired the first two batters of the second inning, the next seven St. Paul batters reached base safely. Sean Crean walked, Shaun Remillard singled and Cofrancesco singled to load the bases. Nick Morrell delivered a two-run single to make it 3-0. Then Thayer blasted a 2-2 pitch over the left field fence for a three-run homer. Greene made it back-to-back homers with a solo shot of his own and St Paul led 7-0.

Three St. Paul errors helped St. Joseph’s to score two runs in the third, but back-to-back doubles by Thayer and Greene in the bottom of the frame pushed the lead back to seven at 9-2.

In the bottom of the fifth, St. Paul took advantage of an infield error that allowed Thayer to bat with a man on and two outs. Thayer jacked his second home run of the day, making it 11-2 in favor of St Paul.

St. Paul 9, Oxford 6: In a combined team effort, each player in the Falcons’ starting lineup scored exactly one run in a win at Oxford on Friday. Starter Ethan Rembish picked up his second win of the year, going six innings, allowing four runs on four hits while striking out five.

St. Paul erupted for six runs in the top of the sixth. Oxford pitcher Liam Donaldson retired the first two hitters of the inning, but getting the third out proved to be evasive.

Sean Crean picked up his second hit of the afternoon, advanced to second on a passed ball, and scored on Shaun Remillard’s RBI single. Hunter Keller came in from his shortstop position to relieve Donaldson. After walks to Josh Cofrancesco and Nick Morrell, the bases were loaded. Julian Thayer then delivered a bases-clearing triple over the right fielder’s head to give St. Paul its first lead of the day, 6-4. Ryan Greene delivered an RBI double, scoring Thayer, and it was 7-4. Quinn Hillman relieved Keller. Parent greeted Hillman with an RBI single and the score was 8-4.

Canton 6, Terryville 4: The Kangaroos fell to 3-4 for the season with a loss on Saturday at home.

“We finally got some nice weather today and the boys had a strong meet,” Tamara Stafford-Kirk reported. “We’ve been working them hard in practice so their legs are pretty tired. To have the performances we did this early in the season is very promising.”