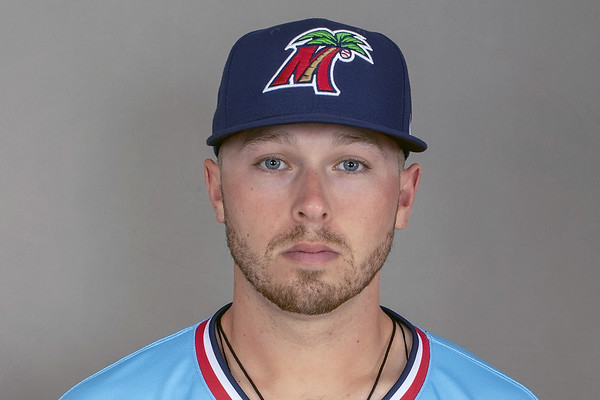 This 2019 photo provided by William Parmeter shows Fort Myers Miracle minor league baseball player Ryan Costello. Minnesota Twins prospect Ryan Costello was found dead in his New Zealand hotel room Monday, Nov. 18, 2019, days after joining a team in the Australian Baseball League The 23-year-old third baseman died in his sleep, the Auckland Tuatara said. No cause was given. Born in Hartford, Connecticut, Costello played minor league baseball for the Clinton Lumberjacks and later for the Fort Myers Miracle during their 2018 championship run. (William Parmeter via AP) Buy this photo

Charlie Hickey was having coffee Monday morning when he received a message he never expected to see.

The 23-year-old third baseman died in his sleep, the Auckland Tuatara said. No cause was given.

“I found out at 7:30 this morning,” said Hickey, who was Costello’s head baseball coach at CCSU. “It was a shock. You just never expect something like this and you put your thoughts and prayers with his family and try to understand what happened.”

Hickey had just seen his former player a few weeks ago at the school’s homecoming weekend, right before Costello was getting ready to play winter ball in New Zealand.

But concerns were raised when Costello failed to report for practice Monday, days ahead of Tuatara’s opener for the 2019-20 season.

“He was a fun kid to be around,” Hickey said. “He was obviously a very good baseball player. But he had a personality to himself. He was confident and didn’t mind telling you that. When he walked into the room, he was the one talking. He was just a spirited kid.”

Born in Hartford and a graduate of Wethersfield High School, Costello played three seasons for Hickey at CCSU, helping lead the Blue Devils to the 2017 NCAA Super Regional in Fort Worth, Texas.

He also played one summer for the Blues in 2015 before he was drafted in the 31st round by the Seattle Mariners in the 2017 draft.

“It is with very heavy hearts that we announce the passing of former Bristol Blues third baseman, and player in the Minnesota Twins organization, Ryan Costello,” the Blues said in a statement. “Costello was a standout player for the Blues in 2015, and continued that success into his minor league baseball career. Our thoughts are with Ryan’s family and friends during this difficult time.”

Costello spent one season in the Mariners organization before being dealt to the Twins, along with Chase De Jong, on July 30, 2018 that sent left-hander Zack Duke to Seattle. Costello played minor league baseball for the Clinton Lumberjacks and later for the Fort Myers Miracle during their 2018 championship run, where his home run helped lift the Miracle to their title win.

“We are saddened to learn of the untimely passing of Ryan Costello,” the Twins said in a statement. “The entire Twins organization sends our most sincere condolences to Ryan’s family, friends, coaches, and teammates.”

One of Hickey’s best memories of his former player wasn’t the trip to Fort Worth or when he was even drafted. Instead, it involved Costello sitting on the couch of his office, asking his coach what he needed to do to get better.

“It was at the end of his sophomore year and he was frustrated in the inability to play and stay healthy,” Hickey said. “We had been struggling as a team. But we talked about him staying in the program and helping us push this thing over the top. His junior year, we end up winning the conference and going to Fort Worth, Texas to play in the NCAA regional. Ten days after that, he was drafted by the Seattle Mariners.”

“He challenged me and made me a better coach and a person,” Hickey added. “And I hope I was able to do the same for him. He was such a great kid.”