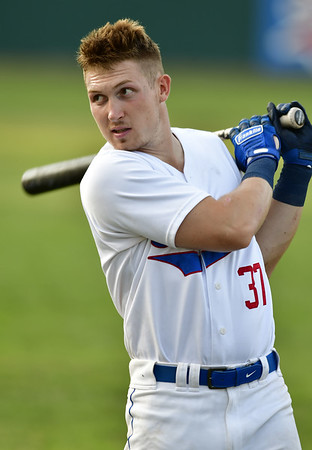 BRISTOL - Bristol Blues third baseman Buddy Dewaine ranged several feet to his left, sidestepping his way to field a grounder in the hole between the hot corner and shortstop.

Dewaine didn’t miss a beat, scooping it up, sprinting a few feet toward second base to gather momentum and fluidly lasering the ball to first base for a seventh-inning putout Tuesday night at Muzzy Field.

Though it didn’t help the Blues during their 3-1 loss to the North Shore Navigators to open the FCBL playoffs, it was one of many fine defensive plays that have been routine all summer for Dewaine, who consistently makes difficult plays look easy.

“There’s not a better defensive player in the league at his position than Buddy,” Bristol Blues manager Ronnie Palmer said.

After losing out on the FCBL’s biggest end-of-season award when the Navigators’ Sean Lawlor beat out both Brandon Miller and Austin White for MVP, it looked as if the Blues might be shut out for any 2019 accolades.

But Dewaine this week was named the league’s Defensive Player of the Year after posting a .919 fielding percentage with just eight errors. He ranked first in the FCBL with 62 assists and 29 putouts. That came while playing the second-most innings in the league (282⅔).

Dewaine was coming off a terrific junior season at CCSU, where he committed the team’s third-fewest errors (10) and finished with a .945 fielding percentage. He also hit .285 this season while batting in the middle of the order in addition to being a lockdown defender with a rocket arm that his teammates have come to respect.

“I can play replacement level defense there, but if you put me there a whole season, I wouldn’t do nearly as good as Buddy. He’s got an absolute rocket,” the Blues’ Kyle Maves said in late July after having been moved from his usual perch at second base over to third to give Dewaine a break.

All season, Dewaine has showcased terrific defensive ability, launching throws from deep in the hole behind the bag or charging slow rollers to barehand balls and gun runners at first.

Of course, believing Miller to have been slighted on the league’s MVP award and the club’s top starter, Mark Faello, not having been a finalist for Pitcher of the Year in the FCBL, Palmer was still unhappy, saying that Dewaine deserved to win his award, but it wouldn’t have come as a surprise if he hadn’t.

“If he wouldn’t have [won], it wouldn’t have shocked me. Nothing shocks me anymore. Faello, nothing. Brandon Miller, nothing. Buddy got something,” Palmer said following the Blues’ 3-1 loss to the North Shore Navigators in an FCBL playoff game Tuesday.

“It sounds like sour grapes now. We didn’t win a lot of postseason awards, and we just lost the first game of the semifinals for the third year in a row. So here I am, the head coach crying about it, but it’s true. I think the players deserved a lot better than that.”

Palmer was reiterating his previously documented frustrations with the league’s coaches, who vote on who they believe were the top players, and the league administrators, who put together the lists of award finalists.

“Maybe [Dewaine winning] was just a token to make sure we don’t get too pissed off down here, right? I think a lot more people deserved awards than got credit,” Palmer said. “The fact that Faello didn’t even make the final vote is just unbelievable to me, and with Brandon Miller, I would certainly like to see the voting because he was in the top five in every offensive category in the league.”