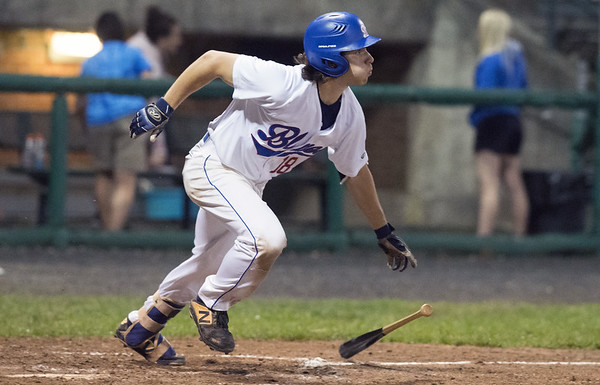 BRISTOL - Postseason baseball and success have not been synonymous terms the last two seasons for the Bristol Blues.

Thanks to several missed offensive opportunities in key spots Tuesday night, plus a terrific late defensive play, the second-seeded Blues are on the verge of a semifinal exit in the FCBL playoffs for the third consecutive year following a 3-1 loss to the third-seeded North Shore Navigators at Muzzy Field.

With no outs and trailing 3-1, the bottom of the Blues order loaded the bases for league MVP finalist Austin White. White drew a 3-1 count before lifting a fly ball to right-center field, where Navs right fielder Dominic Freeberger camped under the ball.

The ball looked like it was hit deep enough to score Zeke Diamond from third, and Bristol Blues manager Ronnie Palmer, the team’s third base coach, elected to have Diamond tag up and head for home.

But Freeberger gathered his feet, got momentum after his catch and uncorked a missile that careened toward Navs catcher Carson Wetterau.

Wetterau laid down a tag nanoseconds before Diamond could slide under his glove for a double play that preceded an inning-ending fly out by Christian Beal with runners on first and second.

“My thought process there was that we haven’t really done anything all night offensively,” Palmer said. “So I’m thinking, ‘All right, let’s take a chance here.’ Unfortunately, the guy made a pretty damn good throw. … I just felt like we needed to get some energy and get some momentum, and [Freeberger] made a play. Tip of the cap to them.”

Palmer argued the call, believing Diamond’s legs got in before Wetterau tagged him on the back. The argument was fruitless, though, and Palmer was left wondering if he made the right choice.

“I’m the one who made the decision to [send Diamond] so, obviously, I’ve gotta look back at that and see if it was the right decision,” Palmer said. “But when we hit a ball like that with Zeke on third, 99 times [out of 100] I’m gonna try to score him. Unfortunately, it didn’t work tonight.”

The Blues (31-24) went down in order in the eighth, and the third-seeded Navigators (32-25) called on closer Beau Dana - the league’s Top Reliever award recipient - in the ninth. After a tense battle with Kasey Bass in a 10-pitch at-bat featuring four straight foul balls, Dana induced the Blues’ third double play to end the game.

“It’s a tip of the cap because I think North Shore’s guys threw well,” Palmer said. “I’ve gotta do a better job getting these guys in [better] positions. … I could’ve hit-and-run a bit more or [had  them put down more sacrifice bunts] and give them opportunities to drive in runs. We had missed opportunities tonight, we just missed them so I’ll wear it. It’s not the boys’ [fault].”

Palmer was left shaking his head as his team did not provide enough offense for starter Mark Faello (5 IP, 4 H, 2 ER, BB, 5 K), who threw well but took the loss as North Shore’s James Flood (4 ⅔ IP, 3 H, ER) was also solid both pitchers’ first matchup against their respective opponents this season.

Flood was tagged for a run as Dylan Reynolds parlayed a leadoff double to deep right field in the second by scoring on a wild pitch, but Navs nine-hole hitter John Rodriguez answered right back in the third with his first home run of the season, smashing a solo shot well past the left field wall.

League MVP Sean Lawlor put the Navs ahead 2-1 in the sixth by walking, taking second on a wild pitch and advancing home on two straight fly outs, the second a sacrifice fly by Dominic Freeberger.

The Blues had their first chance to break the game open in the fifth, loading the bases on White’s walk and two straight singles by Diamond and Bass. But with two outs, Beal grounded into a fielder’s choice to third base, leaving Bristol blanked and setting up a do-or-die game two at 7 p.m. Wednesday in Lynn, Mass.

In order to avoid another early exit, the Blues will have to muster up more than just the three hits they had Tuesday night, and their one-four hitters (White, Beal, Brandon Miller, Reynolds) will have to do better than a combined 1-for-13 showing.

“Unfortunately, the top of our order wasn’t our normal top of the order tonight,” Palmer said. “We’ll try to bounce back tomorrow. Matt Shane’s gonna be on the mound. Obviously, he’s a guy who’s pitched at a really good college program [CCSU]. He’s pitched in big situations so with our staff right now, I don’t think we could have a better guy out there.”