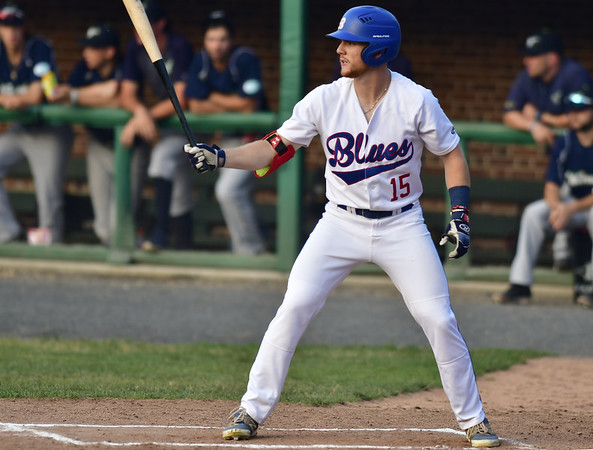 BRISTOL - When a baseball player strikes a pitch with a wooden bat poorly, he often knows it right away.

When a batter doesn’t hit the ball on a wood barrel, the strongest part of the bat called the “sweet spot,” the player will often endure a stinging feeling in his hands. During that time, the bat is vibrating and bending, and if the vibrations are large enough, the bending causes the bat to break - typically at the handle, the weakest and narrowest part of the bat.

No Bristol Blues player knows that entire process better than Brandon Miller, who has broken at least 10 bats this summer during a potential MVP season.

“Wood bats have a smaller sweet spot, and you know if you’re breaking a bat, you’re doing something wrong,” Miller said.

Miller says his broken bats have also been a product of his two-strike approach: that he often gets jammed and has to fight off good pitches with swings that aren’t catapulted at full force.

No matter the case, all of those broken bats have helped Miller make slight adjustments to his swing throughout the season. He’s able to evaluate where things went wrong and more quickly get his swing back to normal to where he’s hitting pitches off the barrel.

When he goes back to St. John’s in the fall, Miller will be just like all of his other Blues teammates in returning to metal, and they are all in agreement, hitting with strictly wood bats has helped them tremendously with their approach at the plate.

“Using wood in the summer definitely makes you a better hitter going back to college,” Blues outfielder Christian Beal said. “It definitely humbles you. It makes you hit the weights a little bit more and process every at-bat a bit more.”

For Beal, it took him a while to get used to wood bats, and he felt the difference early on. Coupled with a minor injury he had to shake off, Beal began the season hitting .211 in the season’s first six games before getting on a roll and ascending to above .300 by Game No. 8, and he’s hovered around that mark ever since.

“I’m a big ground-ball, line-drive hitter, and some of the ground balls I hit in the hole with a metal bat in college go right through the infield for automatic hits,” Beal said. “With metal, you can squeak out a lot of hits doing that. Here, you can’t do that.”

Despite making adjustments, he says he still rolls balls into the dirt at this point in the season, hitting them right at defenders instead of finding infield gaps like they do at Bates College. He says the entire process has helped him improve at the plate.

“It definitely made me a better hitter in terms of finding my holes and staying within myself,” Beal said. “I’ve found I’ve gotta spread the ball a little more the opposite way to really get hits. You can’t really get cheap hits with wood so you’ve really gotta barrel up everything.”

There is, however, a way that wood bats are better for hitters than metal, says Blues first baseman Dylan Reynolds.

“I think when you hit the ball on the barrel it flies a little bit more than metal,” Reynolds said. “If you get that sweet swing on wood, you get those extra few feet than you would with metal. It definitely makes you a better hitter. It makes you more disciplined thinking more about the barrel.”

The huge barrels on metal bats makes things less challenging on college players like Reynolds, and that’s why it was a tough transition going from the spring season to summer ball. It takes a few weeks to adjust for most of the players, but the 9-10-week summer circuit will make going back to campus at Fairfield University a bit easier for Reynolds.

“You go back with a metal bat in the fall, and I’ll hit some balls and be like, ‘Wow. I can’t believe I hit as far as I did with a metal bat. Usually with a wood, it’s broken and done,’” Reynolds said.

Beal agrees, and he’s already itching to head back to Lewiston, Maine, where his bat might feel like it’s corked after going through a wood-bat season.