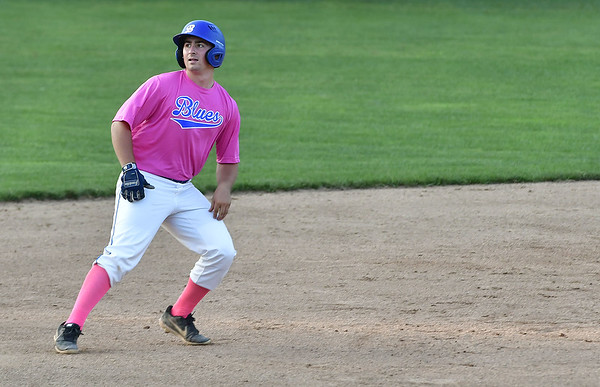 BRISTOL - Bristol Blues outfielder Christian Beal has nothing but respect for a veteran teammate who is getting hot at the right time.

“If you’re a kid trying to learn how to play baseball and try to become a better hitter, Dylan Reynolds is a guy to watch,” Beal said. “I’ve watched Dylan and how he goes about his business since I got here in late May. He always handles his business professionally, and it’s amazing to watch.”

Reynolds, the Blues’ first baseman, had been fairly average statistically over the first two months of the season until a recent surge that has him clicking in the meat of their order.

Heading into Sunday night’s game, he was riding a nine-game hitting streak since July 23 in which he went 14-for-35 with two home runs, four doubles, 11 RBI and 11 runs scored in helping the Blues (30-23) go 7-3 during that stretch.

That includes a key RBI double Thursday and a three-run homer Friday, both Bristol victories that set it up with a battle last night against the North Shore Navigators with a first round bye in the FCBL playoffs up for grabs.

For Reynolds, the left-hander says it was all about staying patient and continuing to believe a simple approach at the plate that has seen his average rise from .242 to .277 over those games.

“It’s baseball, man. You can do everything right and still fail,” Reynolds said. “Sometimes you hit a ball hard right at somebody. Sometimes you squeak a bloop single. It comes and goes. You see a few hot streaks here and there. But no, man, you just keep the same approach. If it ain’t broke, don’t fix it. Stuff will fall.”

Beal says he has watched Reynolds barrel up pitches all season, but even when he squared them up, they weren’t finding holes. Now, those hits are “finding holes left and right,” which hasn’t been a surprise to him.

“I knew this stretch was gonna come for him,” Beal said. “I think in a day and age in baseball when guys lose it mentally in their head, Dylan stays composed. He’s very level-headed and just knows how to play the game of baseball.

“I knew he could do it, and we’re gonna need him to keep doing it if we’re gonna win this bad boy.”

Reynolds’ hot hand is coming at an opportune time as the Blues prepare for the playoffs.

But Reynolds is not the only one who could make a key difference in potentially winning the team’s first championship.

“[Beal] is one of the better leaders on our team too,” Reynolds said. “You always see that guy up. You always see him hustling, and he works as hard as anybody here. He gets here early, stays late, and he wants to win more than anybody else in this dugout.”

Beal, however, shrugs off some of the compliments because he believes he’s got it made. Hitting out of the two-hole, he goes to bat after leadoff hitter Austin White and hits in front of Brandon Miller, each of whom were named league MVP finalists last week.

“I hit in between two MVP candidates, so my job’s extremely, extremely easy,” Beal said. “Austin does a great job working counts. I know exactly what pitch is coming after he’s done, and if I have a guy on second and third, obviously I’m gonna do my best to drive them in, but I’ve got Brandon Miller behind me.”

If there’s a secret to what will make the Blues successful in the postseason, it’s not very well-kept. They’re going to have to ratchet up the offense like they have most of the season behind a balanced lineup that leads the league with a .277 team batting average.

That includes Zeke Diamond, the league’s sixth-best hitter with a .340 average, batting near the bottom of the order.