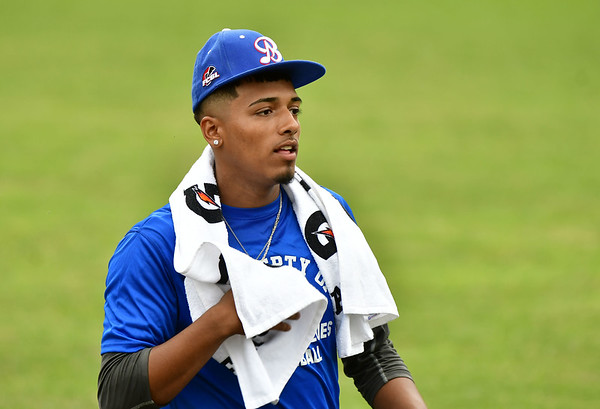 BRISTOL - For the rest of his career, Bristol Blues pitcher and future UConn player Andrew Marrero will always be playing with Mark Gambardella in his heart.

Gambardella, who died last March, served as the president of New Haven’s Dom Aitro Pony Baseball League and was Marrero’s coach in the Dom Aitro Little League program dating back to when Marrero was 4 years old.

“Mark really pushed me ever since I was 4,” said Marrero, who played in the program until he was 13 years old. “[Gambardella] never told me to play T-ball, so I was always playing with the older kids. He was the one that really motivated me to want to play baseball even more. He really got me into it a lot, and he got me a head start playing with all the kids that are a lot older than me. … [I play] for him and my family now.”

The extra motivation from Gambardella is part of what helped Marrero rise to become one of the best high school prospects in the state out of Wilbur Cross High School in New Haven. He committed to UConn and became Huskies head coach Jim Penders’ first commitment from a New Haven public high school player.

“You see a few baseball players that are good, but they never make it out,” Marrero said. “[Gambardella] was always the one who pushed me to try and strive for more, and I think that’s what got me into the mentality of staying strong and actually achieving things.”

Marrero committed to UConn just prior to his sophomore season at Wilbur Cross. The Huskies coaching staff made him feel comfortable, like he would truly be part of a family. They made him feel at home, so he says it was a no-brainer to make an early decision about his college future.

His love for the program growing up is what made the moment when he received a scholarship offer hard to believe.

“At first … I thought it was one of these jokes where people try and prank call you,” Marrero said. “And then [Penders and I] got in contact and saw each other in person, and I came to visit, and it was just so much fun. I felt very comfortable with where I was at, and I’m very happy to become a Husky right now.”

Marrero caught the attention of Penders and his staff at a showcase called the PBR (Prep Baseball Report) Futures Games in Indiana during the summer before his freshman year.

The coaches were impressed with his velocity, the movement of his pitches and his overall pitching style, and they let him know they were interested.

“It was actually really life-changing because it was at a point where you’re playing baseball in AAU and you’re thinking, ‘What do the scouts think?’” Marrero said. “You’re just so antsy, and then you come into a showcase like that and you just see so many scouts. You just can’t believe it. It’s actually kind of heart-dropping.”

But Marrero was able to settle in, stay even-keeled, and his performance set him on the road to Storrs.

“I feel super special because even though it never happened with a guy coming to UConn from an inner-city school like New Haven, I feel blessed,” Marrero said. “Ever since I was little, I wanted to play for a team like UConn, and I’ve also been watching UConn since I was little. It’s like a dream come true.”