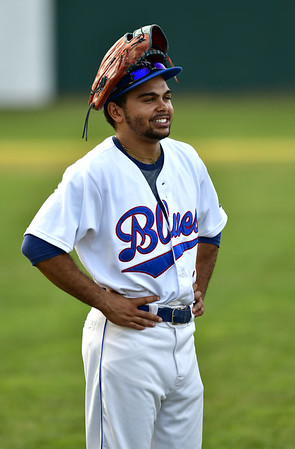 BRISTOL - Christian Beal, a native of Chicago suburb Flossmoor, Ill., says the fraternity of African-American baseball players in the Windy City is a close, tight-knit group.

“There’s no players in the country like the black ball players in Chicago,” Beal said. “There’s nothing like it. No matter what team you play for, it’s a close-knit community.”

Beal, now a Bristol Blues outfielder coming off his sophomore season at Bates College, had known that for years while growing up on the city’s south side, but during an offseason workout in the winter of 2017, he was reminded of it even further by budding MLB star Tim Anderson.

More than 2½ years ago is when Beal walked into the University of Illinois-Chicago baseball facilities that are named after UIC Hall of Famer and three-time MLB All-Star Curtis Granderson.

Granderson every offseason allows African-American college players, in addition to minor leaguers and fellow major leaguers, to come use the facilities, so Beal thought he may run into the former Yankees and Mets outfielder, or that he may get the chance to talk with Cleveland Indians two-time All-Star Jason Kipnis, a fellow Chicago suburb native known to frequent the UIC batting cages.

Beal was there to hit with four fellow black ball players, including friend and former high school teammate Bryce Gray, a catcher at Notre Dame. They didn’t see Granderson or Kipnis that day, but Anderson’s presence was even more mind blowing for them.

“It was surreal,” Beal said. “We had no idea Tim was gonna be there, but he welcomed us with open arms.”

Anderson, 26, is a shortstop for the Chicago White Sox, currently enjoying his best season in the majors, hitting .317 with 11 home runs and 37 RBI before being sidelined with an injury since June 26.

“He’s the perfect guy to represent the south side of Chicago-type of black ball players even though he’s not from there,” Beal said. “We see a lot of ourselves in him.”

Despite being born in Tuscaloosa, Ala., and playing college ball in Birmingham, Anderson immediately embraced the city of Chicago and its community. That included the creation of Anderson’s League of Leaders, an organization dedicated to community service in Tuscaloosa and Chicago, created in memory of Anderson’s best friend, Branden Moss, who was shot to death outside a bar in Tuscaloosa.

Reasons like those are why Beal instantly gravitated toward Anderson, and Beal and Gray both soon earned Anderson’s respect, especially after they told him they were from Flossmoor, where Anderson had just purchased a new house.

Beal and company also proved their worth during the workout while Anderson gave them hitting instructions.

“We were talking to him about the ball players that we wanted to be,” Beal said. “And talking about baseball and watching us, I think he saw the hard work and the grit we had.

That day, it wasn’t necessarily a friendship that was born between Beal and Anderson, but a mutual respect and kinship was bred. Anderson gave Beal his cell number, and Beal will still sometimes text Anderson for advice or message him on Instagram after one of Anderson’s big performances.

“We’re close enough to where if I need anything or if I need somebody to reach out to, Tim responds,” Beal said.

Oftentimes, those messages will come after seeing Anderson display Beal’s same sense of passion and enthusiasm with the game that he developed while growing up playing near Chicago.

“You see that energy because we feel every day we go out we have to prove ourselves,” Beal said. “ You know when you see one of us play, we all play with that same mentality and energy. … Every game we know we’ve gotta prove something, and that’s kind of the way we approach it. We’re kind of taught that nothing’s ever given to us.”

During extra innings of a tie game with Trinity, Beal came to the plate with two outs and the bases loaded with the opportunity to be the walk-off hero. He followed by grounding a ball to the shortstop, and on a bang-bang play at first base, he was called out.

Furious at the call, Beal slammed his helmet down, and was almost instantly ejected. The move didn’t cost his team that game, as Bates eventually won, but it did lose game two in which leadoff hitter Beal was suspended.

For Beal, it was a reality check that, yes, he can continue to play with his personality on his sleeve. But, like Anderson, he needs to only explode about the positive things he does and stay calm during the negative.

“You don’t see Tim getting mad on the diamond. He does bat flips because he does good and smiles and dances a bit when he does good,” Beal said. “And that’s kind of what I’ve learned from Tim is just go out and do what you have to do to handle business and be the best ball player you can be, even if that means playing with [positive] emotion.”