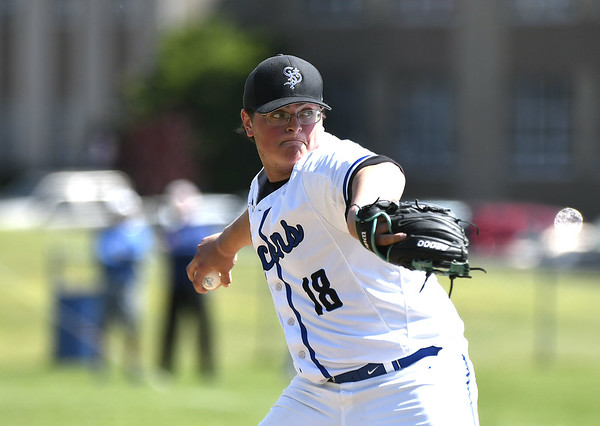 BRISTOL - Former St. Paul pitcher Wes Lahey still remembers waking up on the morning prior to his start in the Falcons’ 2016 quarterfinals game against Portland on June 4.

He knew it was going to be a hot, draining day, and in the fourth inning, the mid-90s heat began to wear on him.

“I just remember being absolutely exhausted on the mound,” said Lahey, now a pitcher for Southern New Hampshire University and the Bristol Blues.

The junior right-hander was able to push through the fatigue, however, and threw a complete game to help the Falcons to a 6-5 victory over now-Blues teammate Austin White and the Highlanders. A week later St. Paul captured its third state championship in program history.

“I was pretty beat, but I knew they really needed that complete game out of me,” Lahey said. “I just kept pushing because that’s what my team needed out of me.”

Lahey’s words weren’t a surprise to Falcons head coach Vic Rinaldi, who took over the program for his first season in 2016 and said Lahey was one of the better leaders he’s had under his tutelage.

“I would say he’s probably my most polished pitcher I’ve had at St. Paul,” Rinaldi said. “He was a big-game pitcher for us. The difference between him and some of the other guys I’ve coached over the years is his mental toughness. The kid was mentally tough no matter what situation we put him in.”

Whether Lahey was coming into the sixth or seventh inning to close out a game, or if he was slated to start a big state tournament game, Lahey was always ready for the challenge, Rinaldi said and it’s a trait he’s brought to the Blues too. And there was no single performance that stood out more than that complete game against Portland.

Lahey never got the opportunity to pitch in the state title victory. Instead, Connor Crean threw a complete-game gem in a 4-2 victory.

The game was tied 2-2 in the top of the seventh, and Lahey was warming up in the bullpen, ready to come in during the bottom of the seventh. But the Falcons took control, and Crean was left on the mound to finish what he started.

Lahey wasn’t disappointed he didn’t get into the game. Crean, after all, was dealing, and he deserved to cap his career with the day’s final pitches.

Lahey was amped up to throw in his first championship game, but he figured he still had a good shot at pitching for a state title during his senior season in 2017, and he nearly did. Lahey started in another quarterfinals game against Housatonic in the state tournament, but two ill-timed St. Paul errors helped lead to a 7-6 comeback victory for Housatonic, sending Lahey and company to an early exit. But that’s where Lahey’s mental toughness came to the forefront again.

“That was really tough to watch happen. It wasn’t easy,” Lahey said. “We were upset, obviously, after the game, but I kind of [used that] my senior year summer and went into that summer focused and ready to go to Southern New Hampshire and work as hard as I can.”

Lahey parlayed a solid summer pitching for the Bristol American Legion team into his redshirt freshman season at SNHU.

At St. Paul, Lahey says he learned from upperclassmen such as Crean, Troy Micale, Ben Mazzone, Jackson Hines and Emilio Santiago how to carry himself on the mound and off of it, and he also learned how to react to losses and grow from them. That’s what helped him going into SNHU, where he had to deal with disappointment in the form of not playing during his first year on campus.

“I was getting upset that I wasn’t being given a chance, but I also had guys there who walked me through everything and told me everything was gonna be fine. Just be patient and wait your turn,” Lahey said.

Lahey has gotten his turn in the Blues’ bullpen and the starting rotation, where it looks like he could be slotted in as the team’s No. 6 starter the rest of the summer.

He has started one game, appearing in eight, and owns a 3-0 record with a 3.48 ERA with nine strikeouts and nine walks in 20 ⅔ innings.

If Lahey continues to improve on those numbers, it won’t shock Rinaldi.

“It’s always good to have a guy you know you can count on every four days who you know when he’s on the mound he’s gonna give you a very good chance to win,” Rinaldi said. “He worked hard in the winters and offseason, and he still does. That says a lot about his character and motivation.”