Handful of Bristol Blues players have battled back from Tommy John surgery, including help from former Yankee Pineda 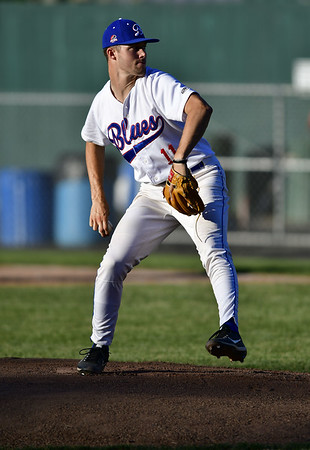 BRISTOL - When Ryan Lauk, starting pitcher for the Bristol Blues and a reliever at Wagner College, tore the UCL in his right elbow during his freshman season, he never imagined who he would be rehabbing with in the New York City facility following Tommy John surgery in April 2017.

Former Yankees starting pitcher Michael Pineda and first baseman Greg Bird were each alongside Lauk at different points during the rehab process, which was overseen by Yankees team physician Dr. Christopher Ahmad. Bird was coming off a foot injury, but it was Pineda who was able to give Lauk some first-hand advice as the All-Star was coming off his own Tommy John surgery.

“He was right next to me, and we were working on control with a ball and a trampoline,” Lauk said. “He was maybe two weeks behind me and was in the early stages of rehab. He was looking at me like, ‘Why are you throwing it so hard? Take it easy.’

“We were laughing and joking around, and he said, ‘You’re with good people. Just take your time.’ Don’t rush through this. You’ll be better in the end, but don’t try to overdo it if you’re feeling good one day.’”

For a 19-year-old college pitcher who had never suffered any sort of arm injury in his life, it was some great reassurance from someone of Pineda’s status.

“It definitely keeps your head right and tells you not to get down because it happens to everyone,” Lauk said.

Tommy John surgery has become more common than it ever has been, and Lauk is one of five players on Bristol’s roster who has battled back from the injury to find success.

Fellow pitchers Christian Seelhorst, Tim Pfaffenbichler and Wesley Lahey (all Blues right-handed relievers) and third baseman Buddy Dewaine, who hurt his elbow pitching at Montville High School, each suffered a torn UCL and struggled through the long rehab process that is as much of a mental grind as it is physical.

“When you’re coming back, the last feeling you had throwing a baseball was that pain that occurred,” Lauk said. “It’s tough. [Toward the end of rehab], they’re telling you you’re healthy, but you’re still really tense.”

That’s something his fellow Blues agree with, including Seelhorst, who suffered the injury in August 2017 prior to his senior season at Shaler High School in Pennsylvania.

“Whenever I found out the news I was gonna have surgery, I broke down and cried because I never thought I’d be able to play the game of baseball ever again in my life,” Seelhorst said. “But then I took senior year as another opportunity to grow and get mentally stronger. I feel like it helped me a lot off the field and growing as a player, developing into who I am now.”

Seelhorst missed his final high school year, but still made the roster at Seton Hill University as a relief pitcher, where he struggled with a 6.26 ERA in 23 innings.

Seelhorst was set to be shut down after next week’s All-Star break at the request of his Seton Hill coaches, but he was released early by the team on Wednesday afternoon.

He said that if he tore his elbow a second time, he would most likely retire.

“I don’t wish it upon anyone, and if it happened again, I think I’d hang the cleats up,” Seelhorst said. “I love baseball so much, but the process to come back was very hard.”

Dewaine, on the other hand, said he would keep trying to play if he suffered the injury again.

“But I understand where [Seelhorst] is coming from,” Dewaine said. “It was pretty hard. It’s just discouraging. But it’s like that with any injury where you have to take an extended amount of time away from the game. It’s just tough. You’re away from the game, and it gets you down. The only thing that’s driving you is getting back to playing.”

Dewaine suffered his injury during his senior season, but played 5-6 months with a partially torn UCL. He refused to get the surgery until his freshman year at CCSU because “it was my senior year. It was my last shot.”

He finally got the surgery, and he said it took him about 18 months to fully recover.

“You’re just afraid to let [the ball] go because it feels a little tighter. It just feels different,” Dewaine said. “I had to take a long time to just get a feel for my arm again.”

Dewaine, however, eventually found his groove and has seen plenty of success since returning from the injury, leading CCSU to its first NCAA Tournament victory and being named to the Fayetteville All-Regional team.

Dewaine also was named to the Futures League All-Star game this summer, and he may be joined there by Lauk, one of the Blues’ top starters who is a finalist for the last All-Star selection in the online fan vote.

As with several other comebacks from Tommy John surgery, including Dewaine’s, Lauk believes he is back on track.

“Listen, I’m a guy who believes everything happens for a reason,” Lauk said. “I didn’t play in 2018, and this season that just passed was my first season back. This is me finally getting my feet back under me with the Blues. I feel with every outing I’m getting better and better.”