Mounce brings his Texas pride with him to Bristol Blues 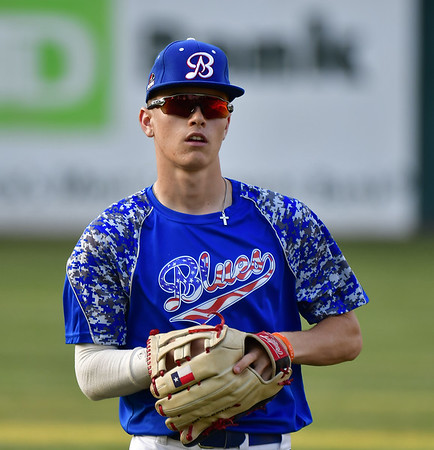 BRISTOL - Bristol Blues outfielder J.T. Mounce hails from Cypress, Texas, and just like many passionate Texans, Mounce has plenty of love for his state.

He wears that pride on his glove in the form of the Texas state flag that is stitched into the tan leather. It’s a reminder, he says, of where he’s come from.

“That’s where I’ve grown up all my life. That’s where I was raised,” Mounce said. “I’m sure people up here are proud of Connecticut, but you get the stereotype of Texas people that are psycho for their state. It’s pretty electric. People love it and are so proud of our state. I couldn’t have asked for a better state to be raised in.”

Mounce attended Cypress Christian, a small private prep school where he says his graduating class consisted of only 56 people. While there, he honed the baseball skills that made him one of five players on 2019 FCBL rosters to commit to Oklahoma State University.

But Mounce wasn’t just a baseball standout at Cypress. He also excelled in football, where he says all the stereotypes of small-town high school football you might see on “Friday Night Lights” aren’t that far from reality.

“[Cypress Christian] wasn’t as large scale as the public school teams get … but it’s no exaggeration. You get some of those where it’s a small town and the whole town shuts down to go to the games,” Mounce said. “Big towns pack the house too. It’s unbelievable. It’s a culture there. It’s a sport, but some of the communities and smaller towns rally around their football team.”

His high school may not have featured one of the state’s stadiums in the cities of Katy or McKinney that range from $70-80 million, but that didn’t stop the Warriors from winning 13 games and capturing a 2017 state championship in front of 30,000 fans at the Dallas Cowboys’ AT&T Stadium.

Mounce, a junior wideout that season, was one of Cypress’ featured receivers in a high-octane, hurry-up spread offense modeled after college programs. In the state title game, Mounce led the Warriors with 162 yards receiving and two touchdowns in a 68-34 victory over McKinney Christian.

“My other buddy, [Joseph Carbone], was a freak so I was the No. 2 guy,” said Mounce, who began as a slot receiver before moving to wideout. “He would get doubled, and I’d run a fade route on the backside. It was perfect. It was so fun. They’d leave me in single coverage and I’d burn ‘em. We had so many weapons that year.”

Mounce used his speed, his most valuable asset, on the gridiron, but he decided to put a bow on his football career after that special junior season.

After going out on top, Mounce focused on baseball, and during his senior year is when he found OSU, a program and school where he found all the things he was looking for at the next level: a good academic school to help prepare him for life after baseball and a head coach (Josh Holliday) who “would really steward you as a man, not only as a baseball player.”

Playing for the Blues has allowed Mounce to prepare himself for the rigors of college baseball. He’s been able to learn from several of the team’s veterans such as Christian Beal, Brandon Miller and Ryan Lauk and glean something from their college experiences to learn different approaches as he heads to the Big 12.

“It’s been great to pick these guys’ brains,” Mounce said. “They’re two steps ahead of me so it’s been nothing but beneficial for me to talk through what things are gonna look like that I haven’t experienced yet.”

One of the questions he posed to fellow left-handed hitter Miller came during a July 1 game against the Nashua Silver Knights. Miller was able to tell Mounce - a 5-foot-11, 160-pounder about to turn 19 years old - about his own physical transformation from his senior year in high school to his sophomore campaign at St. John’s.

“My frame’s not super big so that’s something I’ve kind of been thinking about,” Mounce said. “They said, ‘You’ll be fine. They’ll get you on a meal plan.’ They were just giving me advice on what to do and work as hard as I can in the fall to not completely change my body structure but put more weight on. Just be a gym rat and love the process.”

Mounce will continue to look to improve on his low numbers in his first 10 games with the Blues, which includes a .240 batting average. The struggles, he says, have been beneficial as he heads into his first fall season on a college campus. And his experiences living in Bristol - where he was one of two Texans on the roster before pitcher Arjun Thakar left the Blues following a back injury - have been equally helpful.

“I’m the lone one left. I’m the lone ranger,” Mounce said. “It’s a long way from home, but I like it up here. I was excited when I heard I was coming up here. I’ve been able to soak it in and enjoy it.”