Bristol Blues are adjusting to succeed during tough stretch of season 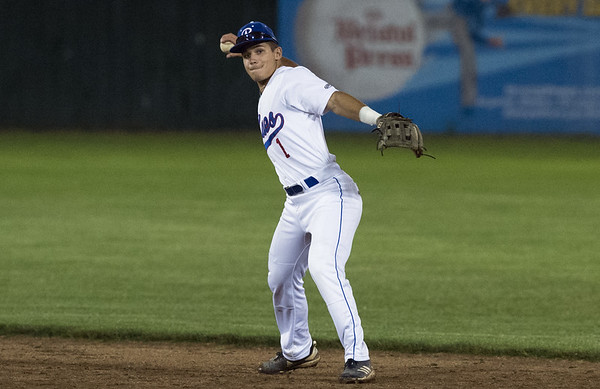 BRISTOL - When looking at the Bristol Bluesâ€™ 2019 schedule, one of the first items manager Ronnie Palmer and his staff noticed came in the last week of June and first week of July.Â

The Blues were set to play 12 days in a row and 17 games in 18 days, which features a stretch of seven consecutive road games.Â

The Blues are one of just two FCBL teams (Westfield Starfires) scheduled to play at least seven games in a row on the road during a single stretch of the season and one of three teams (Pittsfield Suns, Worcester Bravehearts) set for a stretch of 12 consecutive game days.Â

Palmer and crew knew it could be a stiff test in the middle of the summer slate for a group of players not accustomed to playing for such long periods.Â

â€śYou look at the schedule to see how the summerâ€™s gonna play out a little bit. Obviously, this jumps out at you,â€ť Palmer said. â€śItâ€™s a challenge and a tough stretch. â€¦ That was the hand we were dealt. Weâ€™ve just gotta figure out a way to maneuver it.â€ť

The Blues (12-11) have handled it great thus far. They won their first five games of that 17 games in 18 days stretch, enjoyed an off day Thursday, won again to kick off the 12-day marathon Friday and then suffered a 9-6 loss Saturday to Worcester.Â

As they headed into Sundayâ€™s game at the North Shore Navigators, the coaches discussed how they will be preparing and strategizing for the next 10 days.Â

â€śYou wanna do everything you can to make sure the guys are rested up, and you wanna float guys in and out of the lineup so they have off days to make sure their legs are under them and so that we can go out and give ourselves the best opportunity to compete,â€ť Palmer said.Â

Another of the difficulties will be finding enough arms to keep operations running smoothly.Â

Starting pitcher Jack Moore, who had been one of Bristolâ€™s top arms, is done for the season with an injury, relief pitcher Ben DeLaubellâ€™s time with the Blues is over due to his military service duties with Army, and reliever Christian Seelhorst, still working his way back from Tommy John surgery, will be shut down after the All-Star break per the wishes of his coaches at Seton Hill.Â

â€śYou look where our rotationâ€™s at and see if we can get guys some spot starts,â€ť Palmer said. â€śYou structure out a game or two where you have your bullpen guys throw an inning or two each just so everybody stays rested and healthy. Make sure nobodyâ€™s getting beat up too much.â€ť

On offense, which lost outfielder Nolan Cloutier, who has left the roster, Palmer will continue shuffling guys in and out of the lineup to ensure their legs remain fresh.

Palmer said he and assistant coaches Jordie Scheiner and Nick Rascati can tell when guys have more of a bounce in their step or when they need an off day, but they still rely on the players to let them know when a break is needed.Â

Itâ€™s a tough line to play sometimes, as the Blues need to find the right balance of staying well-rested and remaining competitive.Â

â€śItâ€™s a delicate balance that I think every summer organization has,â€ť Palmer said. â€śYou wanna win, you wanna keep guys fresh, and you also wanna get everybody the most amount of playing time - more at-bats, more innings pitched, more innings in the field - that you can. Sometimes it gets to be difficult so itâ€™s one of those things that me, Jordie and Nick and our staff try to keep in mind and do the best we can while also trying to keep it competitive on the field.â€ť