Reynolds was eager to return for second season with Bristol Blues 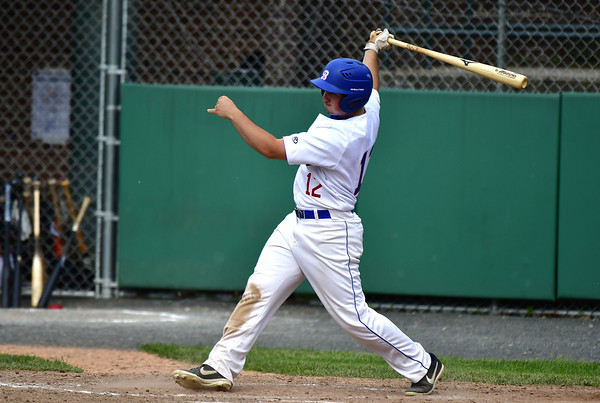 BRISTOL - Dylan Reynoldsâ€™ eyes scanned the Muzzy Field confines, taking in the playoff atmosphere last August, and that was the moment he knew he wanted to come back to Bristol.

It was Game 2 of a best-of-three FCBL playoff series against the Worcester Bravehearts, but for Reynolds, a left fielder for the Bristol Blues batting in the three-hole, it felt even bigger. It reminded him of the setting during his two state championship games while a member of Notre Dame-West Haven, or one of the MAAC tournament games he played in during the spring at Fairfield University.

Thatâ€™s the passion Blues fans had shown on that Aug. 8 evening. And though Reynolds said there were several things leading up to that night throughout last season that made him want to come back this summer, that was what left the most impact.

â€śThe turnout was just amazing,â€ť Reynolds said. â€śThere were so many fans there. It really showed that this town really rallies around this team. The fans care and the parents care, and the host parents care. Everybody was really involved. It was just a nice, exciting atmosphere.

â€śThe fans were there with us all year, but especially when it came down to crunch time, they were all invested and all there and ready to win it. They were just as invested in us as we were invested in them.â€ť

The Blues lost that game, getting swept out of the postseason by Worcester, but for Reynolds it didnâ€™t matter. He was already set on bringing his .339 batting average, fifth-best in the league, 18 RBI and absurd 33:6 BB:K ratio back to the corner of Rockwell Park.

Almost immediately after the 2018 season concluded, the Hamden native, who lives just 40 minutes from the ballpark, told manager Ronnie Palmer, assistant coach Jordie Scheiner and general manager Brian Rooney he wanted to give it another go.

â€śWe fell a little short last year. I wanted to come back, and hopefully this year we can win it all,â€ť Reynolds said.

Reynolds wanted to help the Blues atone for the early postseason exit and give fans the taste of playoff victories after their support all summer.

â€śAll-around, you can tell how good everybody is in this place,â€ť Reynolds said. â€śI love it here in Bristol. Everybodyâ€™s great. The people are great. The fans are great. The coaches, organization, all-around itâ€™s a really well-run, high-class organization.â€ť

Reynolds is the only returning player from the Bluesâ€™ 2018 roster. And although several players are familiar with the territory and live close by (19 of the 35 players on the current roster are from Connecticut), when the team gathered together for the first time in late May, Reynolds was able to give some advice on how to handle business in the organization and around the FCBL.

â€śWhen youâ€™re coming into a place with a new coach and organization, you donâ€™t know what theyâ€™re expecting so I just made sure everybody knew what they had to do,â€ť Reynolds said. â€śI was just making sure everybody felt comfortable in the organization. They kind of jumped into it quick. I didnâ€™t have to do much.â€ť

On the field, Reynolds is an impact player out of the three-slot in the order, and he also brings versatility to Palmerâ€™s club, able to play first base and outfield.

In eight games played for the Blues (3-6) this summer, Reynolds has six RBI, has scored five runs and is hitting .267, the same number he hit in the spring for Fairfield in 50 starts. He also totaled 22 RBI and 20 runs scored, and he was one of three players on the team to have a positive BB:K ratio (25:17).

â€śHeâ€™s not really the prototypical three-hitter where heâ€™s gonna drive balls deep into gaps, but he just has such a great approach where he sticks to it really well to where heâ€™s just effective with it,â€ť teammate Nolan Cloutier said. â€śHe knows his strengths and doesnâ€™t expand the zone. Heâ€™s very patient.â€ť